Several of our writers competed in the Magic Misadventures Seasonal Tournament. These are Sirturmund's and Leer's experiences, reflections, and notes to their future selves. Some background on myself: I have made top cut in seasonals twice so far, both times making it through with a 7-2 record and top ladder finishes. In every other Seasonal I have finished either 6-3 or 4-1 (back when it was only five rounds).

This season I spent a lot of time grinding to top 35 placements in the ladder playing Scouts, hoping I could top cut again with a 7-2 record. However, this season ended up being by far my worst performance ever and hopefully, this blurb from me can help you all not make the same mistakes I did.

One of the things I have always valued in LoR is data. I follow all the Twitter folks whose data give us meta reports and match up tables. I stalk the many websites that pull data from the game. I’m a math geek at heart so these tools help me become a better player, but this time around I feel like I over-relied on the numbers.

By all accounts, two decks were predicted to dominate this Seasonal: Ahri Kennen and Pantheon decks. So my plan was simple: ban one and target the other. This strategy has always worked for me in my other top 32 performances so I started looking at the data.

I felt that great players would be able to pilot Ahri Kennen well enough to overcome bad matchups, so I decided to go with the ban-Ahri-Kennen and beat-the-Pantheon line. Looking through many match up tables, I ended up settling on a triple Ionia lineup which on paper all had 60%+ win rates against Pantheon decks.

However, there was one problem. The decks I had chosen, while great decks, were not decks I had played much of at all this season.

I had barely played Ahri Kennen and Lee Sin, and never played Viego Kindred at all. But the data had to be correct, right?

So, I decided to go against the common sense of bringing decks I was comfortable with. I brought decks I had barely played…

… and got severely punished by it.

From incorrect mulligans, to just small misplays that over the course of the match accumulated to losses. I just didn’t know how to play these decks optimally. The decks I had been playing all season were anti-Ahri Kennen decks, and I was too afraid to get outplayed in those matchups.

I tunnel-visioned into banning the best deck when it was probably better for me to target Ahri Kennen based on the decks I was comfortable playing.

Ironically, the morning of the Seasonal, I saw the data for the APAC and EMEA tournaments and saw that it wasn’t Pantheon that was the second most played deck, but Darkness instead. A deck that destroys my lineup.

I had a gut feeling all morning that I should switch my lineup and play something I was comfortable with and that could reliably beat Darkness, like Scouts, but I ignored those feelings. I kept pushing them to the side and stubbornly stuck to what I had decided a week ago.

I was not flexible and that is where my next advice comes in: listen to your gut. Being stubborn and not willing to admit when your idea will not work is not the way to come into a Seasonal. Had I listened to myself, perhaps I could have made it farther than I did.

Notes to Future Me

So for the future, here is what I recommend for everyone planning to play in a Seasonal:

Hopefully my misadventures this Seasonal are able to help you all do better in your own tournaments in the future. Just know the player you are and stick with that, don’t try to reinvent your style!

I began thinking about my Seasonal lineup around a week before the tournament after I hit 450 LP in the EMEA shard. Previously, I played in smaller community tournaments and the Gauntlet, but mostly random stuff that I enjoyed playing, like Diana Zoe for example.

Since everyone was talking about Ahri Kennen being busted and not targetable, I decided to bring the deck as a ban bait. I wasn’t well-practiced on the archetype, but it was reasonable to assume that it would be banned most of the time. The few occurrences I would have to play it, the power level would surely carry me.

With two decks left to decide, I began some brainstorming. One thing I was sure about: I should bring decks that I genuinely enjoy playing and that I am practiced with. There is no point in playing a tournament that you don’t enjoy playing.

Taking their power levels into consideration, this led me towards two decks: Pantheon Taric and Fizz Lulu. Both of these decks felt superbly powerful on the ladder and I enjoy playing them. I wrote freaking guides on both of these decks, so surely I was practiced enough with them, right?!

Looking at the matchup tables though, they didn’t fit that well together. Pantheon Taric wants to play against Darkness, while Fizz Lulu wants to ban it. The first wants to ban aggro, the second doesn’t. It became apparent very quickly that this couldn’t be my lineup.

After scrutinizing Legna’s matchup table some more, I decided on two possible lineups:

Taric Pantheon and Akshan Sivir: They have almost identical matchups, targeting most Midrange and Control lineups. Since there was almost no aggro on the ladder, their weakness seemed non-existent.

Fizz Lulu and Lee Sin Zoe: Lee Zoe is my all-time favorite deck. I welcome any opportunity to play it, and I couldn’t pass up this one. After we ban Ahri Kennen, the deck also lacks bad matchups besides Darkness, just like Fizz Lulu.

To be honest, I went a little 5Head with my decision-making. I was split 50/50 between these two options, even one day before the Seasonal Open Rounds. After reading den’s Seasonal meta prediction and comparing them to my own ideas, this is what I suspected:

This tipped me towards Lee Zoe and Fizz Lulu, as this lineup targets Pantheon decks, loses to Darkness, but wins against aggro.

What turned out to happen was the following (data due to Legna):

It’s not that people didn’t bring Pantheon decks – they were the third most-played one with a 19% PR. It’s just that I didn’t get matched against the right opponents. Instead, six out of my first seven enemies brought Darkness. Heck, I played against more Bandle Trees than Pantheon decks. And let me tell you, Lee and Lulu suck into Bandle Tree.

I also didn’t run into a single aggro lineup.

In hindsight, the verdict is simple: Had I brought Pantheon Taric and Akshan Sivir, I would’ve had a 15%+ increase in winrate purely due to the matchups.

But could I have known this before the tournament?

The answer is yes and no. Like I tried to suggest, a big part of me simply feared that something bad might happen. I was afraid of aggro decks.

I also fell into the pitfall of thinking people will bring what’s optimal. This assumption was inconsistent with my very own mantra: Bring what you enjoy playing.

Of course, people would play Darkness if it’s the most popular deck on ladder, even if they ban Ahri Kennen. I did the same last Seasonals. I could’ve even checked Legna’s data on the APAC Seasonals, as they play before the EMEA shard. Just a glance at the data would’ve given me the hint: People love Darkness.

Another pitfall is that I assumed I would get matched against the most played deck (after Ahri Kennen). While this is statistically true in the long run, I think my own experience here is a fitting counterexample. In another world, I would’ve brought Pantheon Taric + Akshan Sivir and only get matched into other Pantheon and the few aggro lineups.

Notes to Future Me

The bottom line is this: Bring a lineup that you enjoy playing and that roughly has the same deck they want to ban. You cannot predict the meta and even if you do, you can not guarantee that you will get matched against the right lineups.

Once again, in hindsight this has also worked for me: 7-2 is not a bad score at all. I only got a single free win because my opponent didn’t show, so really, I went 6-2. I won a lot of the Darkness and Bandle Tree games because I knew how I could win them with my decks, even if they were unfavored.

For the next time, I will make sure to not get freaked out by irrational fear and don’t try to be a 5Head gamer. Like Mr. eMOEtional said on Twitter, don’t (hard) target stuff and just bring your best decks!

- Get your profile to add and share decks
- Connect your Riot account to get match history and deck stats
SIGN UP NOW
PrevPreviousLoR Weekly Watch  February 15 – February 21
NextLoR Patch 3.2.0 NotesNext 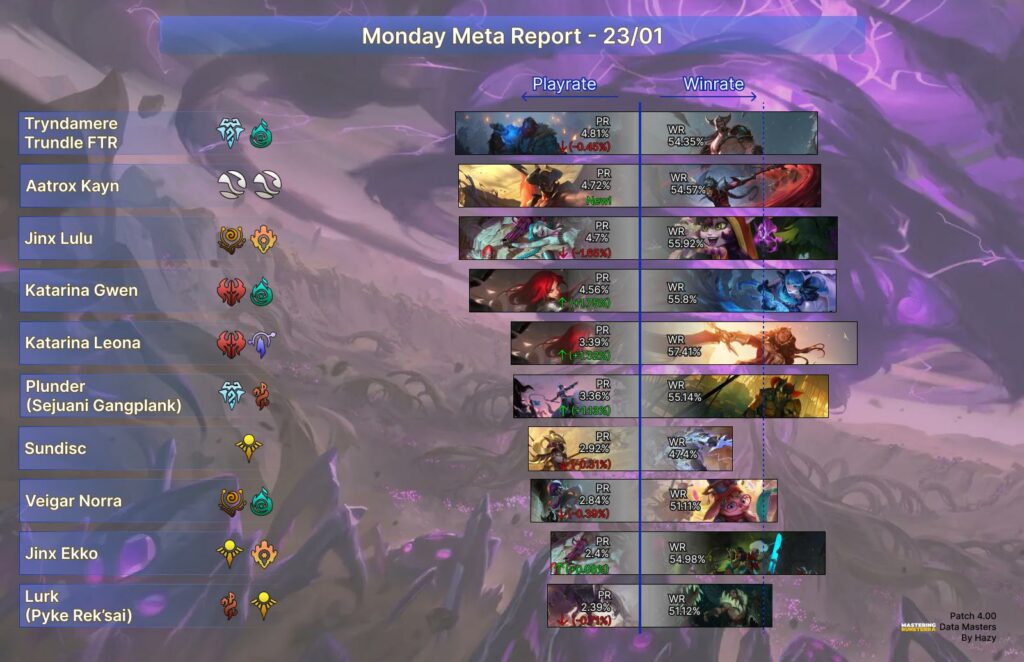