Hey everyone, Shadawx here with the Weekly Watch. This week we got new Wombats members, winning tournament lineups of the week, and more coming up.

No Riot news this week!

We had BestLoRMoments highlight different women in the community in honor of Women’s History Month! So far a few have been showcased and there are many more still to come. So keep an eye out for more spotlights on the wonderful women in our scene.

GrappLr had his deviated septum fixed this week and is recovering from the blood pouring from his nose. Let's give our favorite papaya streamer well wishes to get better and back to streaming soon!

The Wobbly Wombats have announced a couple of new members to their Wisdom, Hash and Trivo! Both are excellent players and will be great additions to the group. Hash, while new to the game, has already topped a seasonals and is striving to learn more, and Trivo is a long-time player with plenty of experience and knowledge to share with all!

No real surprise that Yordle in Arms is abundant up there, and it’s nice to see we still have people trying out other decks like Beastllama on Karma Ezreal and Thomaszamo still piloting Lux Aphelios.

We had the Mastering Runeterra $200 Sunday Showdown, where Sqweeby took home the win. He went with a lineup of Fae Demacia YiA, Bandle Tree YiA, and Trundle Jayce Timelines. Big congrats to Sqweeby!

For the other Mastering Runeterra weeklies, this week we had the one on Wednesday & Friday both won by Davebo on their lineup of Yuumi Pantheon, Fae YiA Demacia, and Jayce Lux.

We also had an EU weekly on Thursday that was won by Phame running Caitlyn Ezreal, Swain Gnar, and Yuumi Pantheon.

The Mystic Shot Podcast’s Tuesday weekly had Hydra’s TheBlackBoss win it all. They brought an interesting double scouts lineup + Fae YiA Demacia, choosing to pair Miss Fortune with Poppy, and Quinn with Kalista, for the two scout decks.

Finally, we also had a special Fight Night BR: Lady Legends this week in honor of International Women’s Day where Lana took it down with her lineup of Sivir Akshan, Yuumi Pantheon, and Scouts.

So with the winning lineups this week, we’re still seeing that YiA decks are the thing to beat, and it’s even making its way into Bandle Tree decks as another wincon.

Yuumi Pantheon also seems to be a big player in the tournament meta, since it has favored matchups into those Scout/Rally pile decks. Overall Demacia seems to be the big region of this season, and I guess we’ll have to see how things play out from here.

So we have our usual weekly tournaments: Giant Slayer’s Fight Night – Americas Monday, Brazil Thursday, and EMEA Friday. Mystic Shot Podcast on Tuesday at 8:30pm EST for Americas. And Mastering Runeterra’s weeklies on Wednesday, Friday, and Sundays for AM and Thursdays for EMEA.

That’ll wrap it up for this week’s LoR Weekly Watch.

Only a couple more weeks left until the patch. I wonder if we’ll see some of the changes to Bandle that people have been wondering about, or if Demacia will get some hits to their cards.

Also big congrats to Aikado who finished his EU Iron to Masters stream in 46 hours! It finished up as I was getting this out!

Hope to see you again next week. Thanks for watching! =) 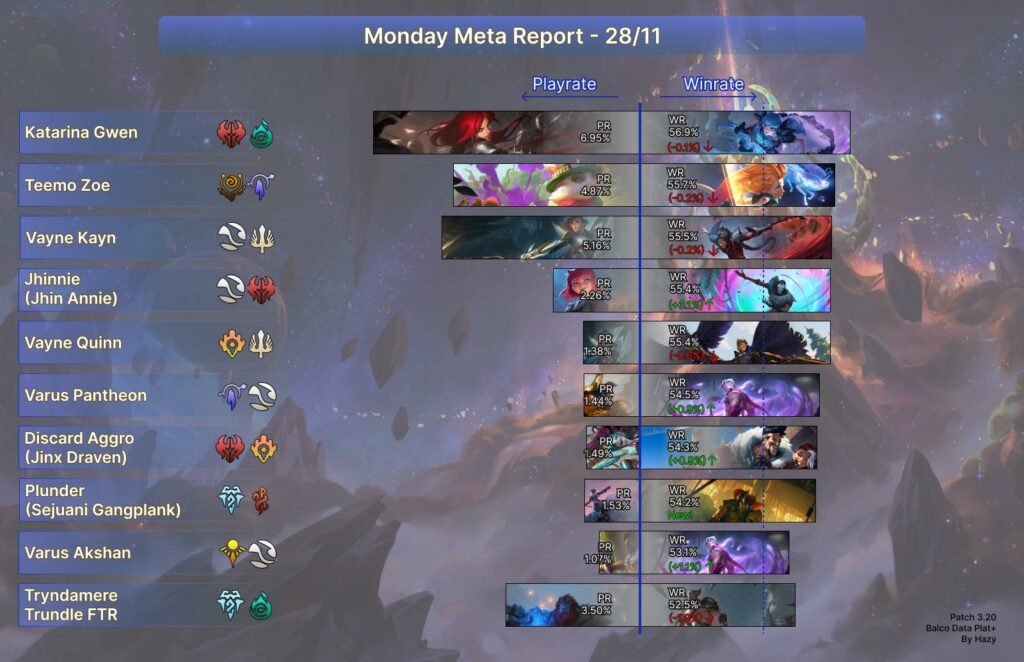