The Primal Shaman Udyr bursts onto the scene, striking one impressive stance after another alongside a few more Freljordian Friends! The man himself comes down with a roar, and an interesting take on his ‘stance swap’ mechanics from League!

Alongside their card post, we also got a link to a dev post detailing what went into shaping this Shaman and his crew!

Check it out here!

When I’m summoned or strike; create a Stance Swap in hand or, if you have one, reduce it’s cost to 0.

Level up; you’ve damaged the enemy nexus 7+ times this game.

When I’m summoned or strike; create a Stance Swap in hand or, if you have one, reduce it’s cost to 0. I have +1|+1 for each stance you’ve cast this game

For Udyr, clearly just the face of his card isn’t enough to really get to know him, lets look a bit deeper…

Grant a Stance to an ally

Deal 1 to EVERYTHING else

Udyr has a lot to take in here. He’s a tad slow to come down, under-statted, asking for 3 more mana to really become a champion. The stances are interesting, basically Moon weapons but permanent buffs and Freljord style. Granting Overwhelm and Regeneration are very interesting ways to try and ensure you get value out of your Shaman, and tying him to plunder isn’t a call I would have made personally. Looking ahead a little, there are other cards that generate Stance Swaps as well so his extra line on the Level 2 version isn’t nothing, but it feels like a lot has to be going right for Udyr to really get going. If he came down and healed or something to help staunch the bleeding from any aggro you’re against, that may make me a bigger fan. I’m not sure if there is a place for Udyr right now, or if maybe he’ll be powerful enough to make his own way in the meta, he does have a very cool kit that builds him up if they don’t shut him down immediately.

Grant your allies +1|+1. Then deal 1 to EVERYTHING

Triggering Plunder type effects, triggering ‘take damage’ effects on allies, this card feels like it could fit right into a scargrounds list over something like Death Lotus. It isn’t overwhelmingly powerful but it fits the role of triggering everything and gives you a bit extra as well.

When I’m summoned, create a Stance Swap in hand, it costs 0 this round.

Decent costed mana that makes one of the buffs, making him into a 5/7 regen to brick enemy attacks, or immediately attack for 7 overwhelm feels reasonable. This one I could see work in the midrange Freljord lists since it gives the stance for free. Maybe we’ll see some number of decks that run fated alongside this pack of Shamans…

When I’m summoned, create a Stance Swap in hand

It isn’t free, but making a card of your choice always has a fair bit of value to it, especially when you’re a cheap unit that can reasonably block much like Conchologist. This one I expect to see played a few times.

Ooookay, now this is kind of interesting. The stance swaps are nothing to scoff at on their own, getting two and being able to use one of them instantly is fairly good. The flexibility of this feels like it can be turned to give you a good position 9/10 times, worst case scenario it’s a 6 mana avalanche, which isn’t great, but a usable fail-state at least. Notably this one gets added to the “Random 6+ cost spells” pool as well, so we could see this off of Flash of Brilliance or Ferros Financier in a Freljord list.

Wrath of the Freljord

Well, spooky pig is spooky. Not an attack trigger, but this gives even better fearsome while he is out, meaning your opponent’s decent blocks go to ‘I have no blocks” very quickly unless they have some choice removal. 3 attack has classically been an average point for units to ensure they can trade up to a degree, and block fearsome, this boy spits in the face of that and makes a lot of boards moot as block fodder. I can see this pig fitting right into any midrange Freljord-based list as a good way to close it out around any chump blockers the enemy may have built up.

I haven’t been around for the time of overwhelm or Scarground’s height, but a fair few of these cards sound like that may change fast, the Wrath is the most obviously impactful one, while I feel like I may need to see Udyr in action before I fully grasp his power. Today is a lot I’m interested to see how it will pan out in practice! 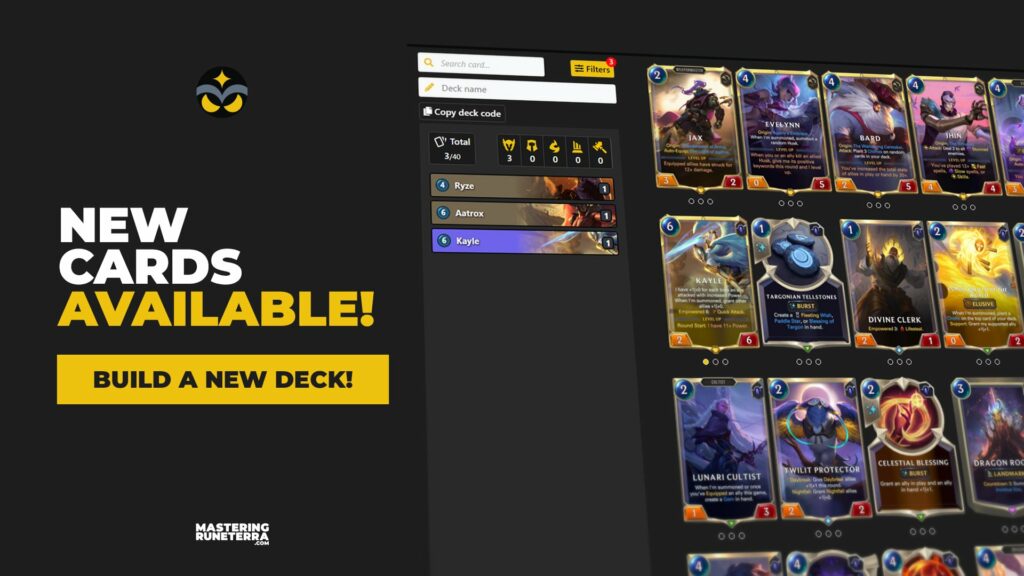 Our brand-new deck builder, with all the new World Ender cards, is up and running!