In his Weekly Watch, Shadawx covers the Worlds Announcement, Amwe’s blog post on overcoming LoR challenges, and more coming up. Hey everyone, Shadawx here with the Weekly Watch. This week we got the Worlds Announcement, Amwe’s blog post on overcoming LoR challenges, and more coming up. 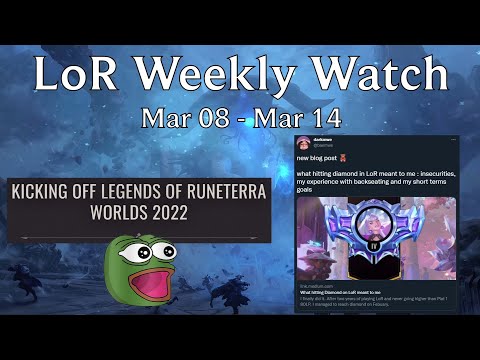 In the past couple of weeks we had some big announcements like the LoR roadmap that previewed exciting changes coming up in terms of future expansions, champion reworks, and balance patches, as well as the announcement for Worlds 2022.

Riot has also announced that all Battle Pass sales for Valorant, TFT, Wild Rift, and LoR, as well as all Bee skin sales in LoL from March 5th to 12th, will be donated to humanitarian relief in eastern Europe. Riot will also be donating $1M on top of any sales made from those cosmetics.

Amwe started writing blog posts, and one of her recent ones was talking about her journey to Diamond in LoR. For those who don’t know her, Amwe’s a wonderful streamer who’s been playing since beta, based in France, and does her best to improve her gameplay and the community through streaming.

In her post, she talks about how proud she was about reaching that milestone and overcoming challenges like having Dis-cal-keul-lia Dyscalculia (a form of dyslexia that impacts math & numbers), focusing on games while talking to Twitch chat, and finally, a point that many other streamers seemed to resonate with… backseating.

She goes on to say that while backseating is usually from those with good intentions trying to help to the one receiving it, it’s hard to process when you’re already focused on the game and your plays. To suddenly look over and see that others have suggested another play, your mind begins to get a bit disoriented and think about comparing the plays made or if either were right.

While it may help some people improve, for others like Amwe it does not. Take a look at the whole write-up and check out her blog for other interesting posts about her thoughts!

As the season is progressing, here we have an updated look at the front page of the Americas ladder. From the 8 players we see here, the decks we got are Scouts, Zoe Aphelios Lux, Pantheon Yuumi, 2 Tristana Fae Rally, Teemo Gnar Ambush, Old school Zed Freljord elusives, and Lulu Fizz Yordles in Arms.

So while we haven’t had any big tournaments the past weekend, we’ve had quite a few smaller tournaments throughout the week. With the Mastering Runeterra dailies this week, there is a summary article with the 20 top cut lineups from the week so take a look at those if you’re interested.

There was also the Mystic Shot Podcast’s Tuesday weekly, where we had Mafia’s Tupac win it all. They brought a lineup of Jayce Lux, Bandle Tree, and Darkness.

Mastering Runeterra has partnered up with Santupea to bring his list of upcoming tournaments on their website! So now if you go to the tournament tab there, you’ll be able to see the tournaments coming up for the week!

Now when looking for upcoming tournaments, you can check out either MasteringRuneterra.com or Santupea’s site!

This week the Mastering Runeterra $100 Dailies are moving to Wednesday, Friday, and Sunday!

It’s a guaranteed $100 prize pool tournament for the Americas region. It’ll have an entry fee of $6.50, and if they reach over 20 participants, each one over 20 will add $5 to the prizing! They’re also working on trying to get some EMEA ones going so keep your ears open on their Discord for more information.

There’s going to be an in-person LAN event in Brooklyn, New York! BrookLAN_NY is hosting the “Legends of BrookLAN” an in-person $100 prize pool tournament for LoR. It’ll be on March 12th at 1 pm EST. Further details can be found on their Twitter!

That’ll wrap it up for this week’s LoR Weekly Watch. As the meta is settling, we’re starting to see more of the same decks and lineups appear. Also with the announcement of worlds, we’re seeing Masters fill up and the LP count increase quite quickly. Be on the lookout for more news next week!