Their Royal Majesties, Ahri and Kennen, still have a firm grasp on the throne, but there's no shortage of brews with which to experiment and climb!

Glad to see you, my friend! Welcome back!

And please, step inside, and let me share with you our latest blends and formulas: exotic and little-tested brews, powerful Meta staples, uncommon blends proclaiming prodigious promise…

… only the best of the best, my friend, distilled from distinguished datamancers Balco (link) and Legna (link)!

… peruse the Cream of the Crop, to be assured your weapon of choice is the best tool for an efficient Ladder climb?

… inspect other Strong Meta Staples, all tried-and-true blends at the top of the power scales?

… or perhaps you'd like to consider these other Meta decks, all currently enjoying an edge against the field?

… or shall I show you our risky and experimental blends, exhibiting great performance across boutique-sized data samples?

… time to take things at whatever pace Fun dictates!

A Glimpse at our Meta 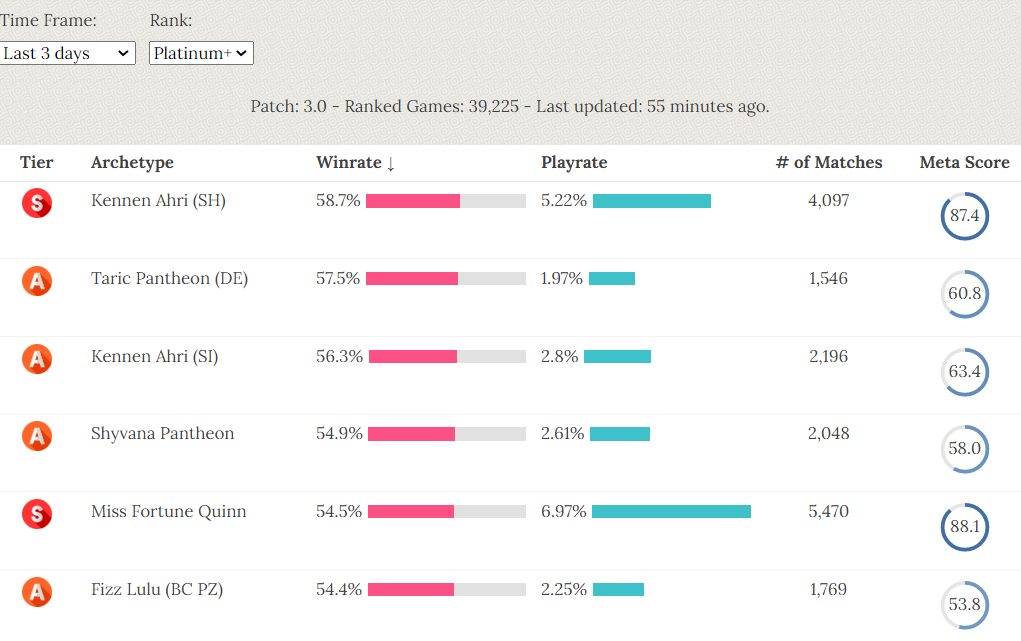 … with Fizz Lulu being the other recent (and, in this case, not quite unexpected) arrival to the upper echelons.

Cream of the Crop: the Ridiculously Strong

The more things change, the more they seem to remain the same. Week after week, one deck rises to contest Ahri Kennen's throne, only to retreat the following days.

Will such be Pantheon Taric's fate?

We shall see; for the time being, though, it has at least succeeded in reaching winrates that, if you excuse my French, sont putain de stupide.

There's little to say at this point: call them benign sovereigns, call them ruthless tyrants, these two rule the Ladder. Surprisingly, though, their popularity does not match their performance, with more pilots preferring Scouts of even Darkness.

Our suggested formula is the tried-and-true, most popular list for this blend -- there is some room for tweaks if you so desire, like including Sai'nen Thousand-Tailed Further Reading: Here's our guide by Wammu, written briefly before the balance patch.

Displacing the still very powerful Shyvana variant, Pantheon Taric is now both the best-performing Pantheon blend, and the current challenger to the Meta throne.

Looking at the numbers, Taric's edge over Shyvana seems to stem from two match-ups in particular:

The permanence of Lurkers is our Ladder's one unshakable truth, but Draven Rumble seems to be on the decline -- we shall see next week how these trends affect the Meta.

Our recommended Taric Pantheon formula is the second most popular for this Champion pair, and currently the best performing. It is also the one with which prominent pilots GrandpaRoji and Scathus both reached a thirteen-games win streak recently.

As proof of the pair's plenteous power, one of Ahri Kennen Shurima's strongest counters is the Shadows variant, which preeminent pilots like Kevor24 find superior overall.

All these blends below perform at what would be straight-up Tier One status, were it not for the putain de stupide winrates exhibited by the ruling elite.

If you seek an efficient climb, these strong, you can take these well-tested formulas to the Ladder without a second thought -- and whichever weapon you choose, be prepared to face them frequently.

Scouts has amply proven not to be a fluke, with prominent pilots routinely reaching the ranks' summit.

Enjoying good matchups into both Ahri Kennen and its strongest counter (Elise Noxus), the only thing keeping Scouts from scaling to the top are Pantheon builds.

Further Reading: You'll find Sirturmund's guide for this exact build in the Competitive subreddit (link); Leer proposes a variation of this archetype, focused on Vanguard Bannerman Still very much a force to be reckoned with, and superior to the Taric blend in a duel.

As I mentioned last week, and as predicted by Leer in his latest Meta report, Fizz Lulu is back in full force: this blend was among the strongest right before the balance patch, was pushed a bit to the side right afterwards, and has now bursted full-force at the top. in their lists, as in our recommended blend. There also seems to be room for tweaks in the Spell column, with successful brews swapping Group Shot , and even making room for Treasured Trash Further Reading: Here's Leer's guide, from briefly before the patch.

Other Meta Decks to Consider

Should playstyle or shortage of shards dictate other choices, these would be our recommendations for those seeking tried-and-true, efficient solutions for climbing the Ladder. All blends below have a playrate of 1% or more in Platinum and above, and winrates above the 51% threshold in the last few days.

This archetype seems to have settled for the non-Landmark build, after initial experimentation with The Howling Abyss Should you be in the mood for a bit of adventure, there's a little-tested version replacing Trundle for Braum, and adding the Landmarks back (link).

While not longer the Ladder terror they were the first week post-patch, Iceborn Poros are still around, alive and kicking, and even morphing and transmuting into different builds.

The most popular formula (link) -- which does perform adequately -- relies on an even split between spells and followers. There's even a version which includes Jinx (link).

Recent innovations, though, aim for a higher spell count, and seem to perform much better -- one such formula is our recommendation below.

A bit off the beaten path, Taliyah Ziggs has shown solid performance for over two weeks now -- an interesting build that preys on Control decks, while being weak to more straightforward forms of aggression.

Among popular options with solid Ladder performance in the ladder, you may consider:

While still popular (and certainly playable), the fortunes of Draven Rumble, Kindred Sentinels and Kindred Viego seem much diminished -- if efficient climbing is your main goal, our recommendation would be to consider piloting something different.

If safety and efficiency are not the only variables you are concerned with, and you wish to add uniqueness into the mix, these blends shall serve you well. They all have playrates below 1% -- meaning your foes would have met a similar deck less than once every hundred games they play -- while large enough sample sizes to guarantee their positive performance is no fluke.

The Ahri Kennen shell has proven capable of any manner of splashes without a dent to its performance, including Ladder forerunner ENiamor splashing Sunken Cost (link) on grounds of it being funny.

Should you wish to join the fun, the Noxus and mono-Ionia version are our other recommendations.

Here returns yet another blend that was very well positioned pre-patch: eschewing the Recall package for the traditional P&Z Discard & Burn tools, Ahri Lulu can run over most other blends that go for early aggression.

It should be noted that, sneers about its skull-void nature aside, Pirates are very strong against many of the strongest decks in the current field -- disastrous odds against Control decks is what prevents it from sailing into Top Tier waters.

Perhaps one of the most obvious Champion pairings when reading their cards' text, Jayce Lux had until now failed to find sustained success. Weak to our ruling Queen and King, the blend is fairly strong against other popular Meta staples. as top end. Quite a bit popular in the Asia-Pacific shard, has gained little traction thus far in other regions.

blend that presents an interesting matchup spread, being strong against both Their Royal Majesties and Scouts.

A Pantheon blend without the popularity of other more well-known formulas, but that has seen quite a bit of play -- and very good performance -- in all shards, especially in Asia-Pacific.

After Poppy's many nerfs, pilots are spending quite a bit of effort in returning Rally Elusives to their former glory.

The most successful endeavor thus far has replaced Poppy with Lulu, and added The Mourned (even without any Recall synergies) into its formula.

Here's another take, pioneered by Darkodious, in this case dropping Zed for Lulu and sticking with followers that do not mind Poppy's nerf -- our suggested build is bA1anceLoR's formula, which he iterated through his Masters climb.

If you wish to throw caution to the winds, and jump into uncharted waters, then these are the blends you seek, my friend: all have proven capable of outstanding performance, but their very small sample size leaves us with no way to determine if such prowess is due to simple luck, extremely skilled pilots, or both.

But, as they saying goes: no risk, no fun!

A very old, fairly skill-testing archetype, which perhaps can be described as the aggro deck that preys on other aggro decks. As one recurring customer said: "Diana is a constant threat at the board, the opponent needs to really go out of their way to remove her, or she's going to cause a lot of damage. And Nocturne is the big daddy of the deck, who comes downstairs to smack Ahri Kennen when they get too loud."

A take on Sentinels eschewing Elise for Vi, currently doing quite well in Europe.

The Ionia variant of this blend is by far the most popular, yet as of late this Shadows formula has proved to pack quite the punch.

Again has the Rose grown hairs -- Yeti hairs, in particular.

And, I have to say, it does have a Yeti ring to it: this blend routinely shows up in the data with great results, then vanishes like a myth that nobody has faith in.

Probably a blend that is some ungodly skilled pilot's idea of "let's have a bit of fun", when they get tired of the grind.

A vintage blend by maître brasseur Scathus; very little data to affirm much about its qualities in the current Meta, other than to say it still kicks behinds.

Looking for some over-the-top incineration? Look no further: Keg-based burn with Funsmith A little-tested blend, but being experimented upon across all shards -- usually a sign that there's something there.

The Reputation package, but with Darius instead of LeBlanc… and with Reckoning telling Freljord decks: "Hey, we can wipe boards too!"

A blend reminiscent of the Noxus Shurima Aggro decks from the Dark Age of Azirelia. Seems to be an ongoing experiment in the EUMA shard, not seen in other servers.

Overwhelm, overwhelm as far the eye can see. A fairly old archetype, with most of its games played in a single server -- most likely a prominent pilot's pet project.

This combo used to rule the meta some patches (and nerfs) ago -- it would appear somebody in the Americas shard is bent on resurrecting it.

A blend undergoing testing across all three shards, with Spectral Matron A single list from the Americas shard, no doubt a research project from some extremely skilled pilot. The kind of pairing that shouldn't work, but apparently does (at least in such gifted hands).

As postulated by the Legna Hypothesis, no meta can be said to have reached maturity unless it contains at least one under-played Riven archetype.

Currently the Asia-Pacific shard spearheads such research efforts with this Discard build.

For our last formula this week, here is Luzeldon's Muscle Dragon (which, I must admit, I did not recognize at first) -- Luzeldon has been tweaking and writing about (and unfailingly reaching Masters with) their creation for several Seasons; you will find their latest guide on the Competitive subreddit (link).

At last we could present you with a well-stocked selection, so I hope you've found what may become your favorite weapon.

Should you require more data and metrics, by all means do let me know -- feel free to poke me on Twitter (@HerkoKerghans), or you can find more of my recommendations and writings here (link).