Tuesday's Tournament saw Arussel rise to the top with the popular powerhouse of Fizz Afaelios, and a returning all-star in Darkness! Tuesday's Road to Seasonals tournament saw a slippery deck come out clearly on top, with FOUR copies of Fizz Afaelios in the top four. While the ladder meta is flourishing, at least for these tourneys the meta seems to have some clear winners... Without further ado, the lineups

The recent innovations in FTR are interesting, here we see a list that has geared itself back up with more anti-swarm tools such as two Boxes, and tossing in the full three Kindlys to keep them stronger against early swarm tactics.

Quickly it seems like we've gone from many innovations and tests to the afaelios lists to having one or two subtle differences. Here we're on two and two for attach cards, and one wallop to stop opponents' key turns.

Slowly people are coming around to the power of Minimorph, and as a result, one of the best decks to wield it is slowly creeping back in time for seasonals. The notable choices here are 2x Mini, 2x Vengeance, and 3x Wail.

This is the exact same list from Arussel so I don't have much to say.

Same as with Afaelios, FTR has a couple general builds nowadays as well, here is the more ramp-centered version, sporting no Kindly's or Sentries, but a full three Faces and It that Stares. It also has a copy of Voices of the Old ones and is up to two Buried in Ice to compliment their three ITS.

Fairly basic, one Vest, one Bastion, one Aegis, one Blinded. Enough niche one-ofs to strike fear in the enemy's heart of a crucial blow-out. Blinded on an enemy's Lantern or Fated unit at the right time can be especially backbreaking for some of the top meta competitors.

I stand corrected on that lack of innovation thing. -Flamespitter - Wallop +2 Bastion and -Conchologist for +Bandle Commandos, aiming to play a bit of a slower value game by the looks of it. Aside from Minimorph and possibly Hush, not many things handle our threats at burst speed in this meta, so Bastion is almost guaranteed to defend well. The commandos are aimed at gaining value over time and also making for another base-elusive unit to hold origami. It's interesting to see and feels like they're targeting something in particular.

The notable things here are the lower number of Absolvers to increase their count on Heralds, not much else different.

Two Bastions seems to be the go to pairing for Taric variations, nothing else too spicy here.

This list is a fair bit more spell focused than the last, with two Hushes to disrupt the enemy's plans and a second Flamespitter to really chunk in with an early Fizz.

This scouts list opts for two Shield of Durands aiming to keep their key threats alive such as Miss Fortune, Quinn, Broadwing, and Cithria since most removal is damage based still. It also goes harder on Cithria over Genevieves.

The new trick for this deck as of late is to toss in one Desert Duel since Quicksand has been falling off in it's supremacy what with attach strategies being fairly common recently. We can’t win them all: LoR is a zero-sum game, and every victory demands a defeat. Sirturmund and MonteXristo reflect about what happens when things don’t go our way, and Fortune greets our efforts with slings and arrows. 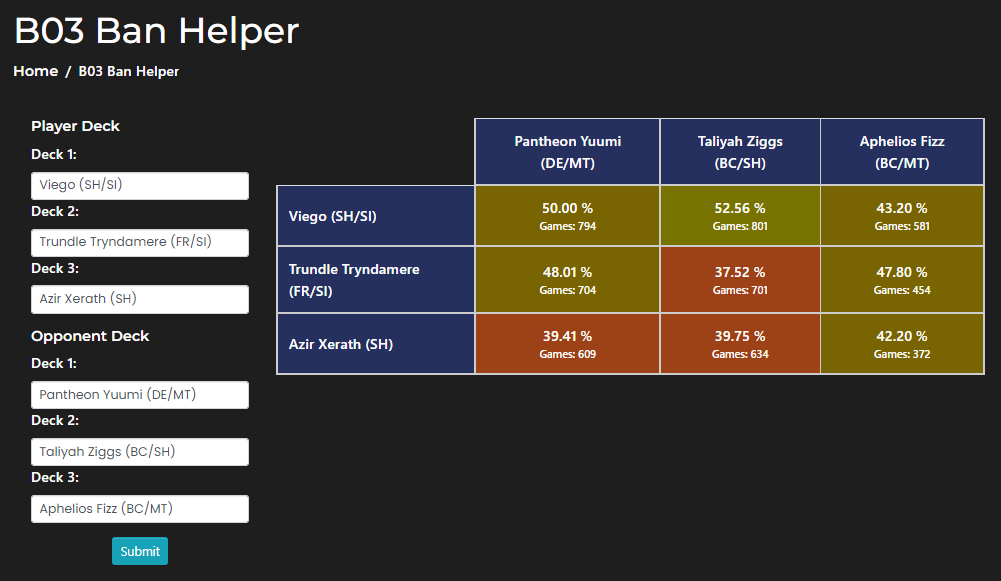 Just in time for our charity tournament and Seasonals, Mastering Runeterra is launching their brand new Best of 3 Ban Helper AND a Matchup Table!