Patch 3.4.0 notes have dropped. Read the changes and hear Majiinbae and JasonFleurant's thoughts on the changes. Who doesn't love patch day? Here is the entire patch notes including up and coming content, alongside Majiinbae and Jason Fleurant's reactions to the changes!

We’re experimenting with a new approach to live balance this patch. In addition to the usual card updates, we’ve taken a holistic look at gameplay patterns that aren’t easily or quickly addressable by changing existing cards, so instead, we’re adding a few new cards!

This patch, we took a look at regions that lack core tools to deal with wide boards, as well as elusives, leading to one-sided matchups against that archetype, and we’ve created a new spell card for each of them to help shore up that weakness: Piltover & Zaun, Targon, and Shurima.

While we have some other changes in this patch to help Shurima handle multiple enemies, Shurima has always been reliant on Vulnerable to address single targets. That’s a strong game plan when you can attack, but we felt they needed a tool that could also work on defense rounds. https://www.youtube.com/embed/xTbbL7b0F_I

Targon is great at creating large single threats, but can struggle with wider boards. While we don’t want to change that identity entirely, we did want to give them an option for slowing down multiple attackers so that their slower game plan has a chance. https://www.youtube.com/embed/0EfGpSR5LCQ

Direct damage is meant to be a strength of Piltover & Zaun, and while that was definitely the case for single targets, their AoE options were not living up to that dream. Rocket Barrage should help keep Piltover & Zaun as a strong option to look towards when you want to be sure your deck can deal with a horde of little aggressors. https://www.youtube.com/embed/UhzjaPKL8tc

As mentioned in the new cards section, we wanted to make sure that every region had some tools to deal with the threats they might face. We also wanted to help out a couple of underutilized champions, and give some gentle adjustments to some of the decks that have been leading the metagame for a long while.

That being said, there are a few cards not being updated (yet) that we want to provide some extra context on:

Here’s a look at each of the card updates coming in this patch:

Moving Aphelios’ Moon Weapons to 3 mana helped contain him at a time where he was dominating the meta. But as we’ve also adjusted other cards he works well with, and as the game has grown, we think the Moon Weapons would be (mostly) safe at their original cost again.

Crescendo pr esented a balance problem at any reasonable cost because of its ability to consistently retrieve a specific, powerful 2-cost unit from your deck. While this did offer some interesting deck building challenges, it also limited our ability to make strong 2-cost followers in the future.

Azir’s love of units and Shurima’s love of landmarks led to some internal strife, especially in Shurima-only strategies. This change should help Azir players feel better about their board, no matter how they’re filling it.

You may have seen Gnar around Runeterra occasionally recently, and while we’re happy to see a newly released champ succeed, there can be too much of a good thing. We wanted to make a smaller change to tone him back without making him completely un-Mega.

Pantheon has been succeeding in a number of strategies, and with his new feline friend around, we felt he needed to pack a little less punch on his own.

Lurkers have been a consistent force for a good bit of time now, and while they aren’t completely dominant, we think that taking a few teeth off the sharks could let other decks shine more. You can see the Xer’Sai Dunebreaker change further along in the patch notes as another example.

While Rumble has been having some success on his own, his Mecha-Yordle friends have spent most of their time on the scrapheap. We’re giving several of the weaker mechs a tune-up, and making sure Rumble plays more nicely with his Mecha-Yordle pals.

Viktor’s machine evolution already asks a lot out of a player, between creating cards, playing a Slow spell, and still managing to protect your machine overlord. By taking the mana cost off the Hex Core Upgrade, we hope Viktor can focus on his self improvement without committing resources to the cause every turn.

As with Pyke, we’re toning down Xer’Sai Dunebreaker to help other decks shine against Lurk more overall.

Much like Lurkers, Darkness has been a deck holding its own at the top of the meta for a long while without ever really taking over. We wanted to reduce their ability to trade off with aggressive minions early while also progressing their late game (evil) plans.

While we were glad to see Vanguard Sergeant become more of a general use tool for Demacia, access to a well-statted body and For Demacia! was just too good a deal for the Scouts deck. We’re turning this one back, but going to look at more changes to Elites in a future patch.

While Bandle City is meant to be good at Manifesting answers, these two were doing so at a remarkably efficient rate.

Targon is meant to be good at handling single threats slowly, regardless of size. Paddlestar was certainly nailing the “slowly” part, but was falling short against larger targets.

Quicksand was potentially a potent answer to enemies with strong keywords, but its single target focus often left it ineffective against the kinds of decks it was meant to address. Now, it’s a much more flexible tool, and can be a strong answer to a single, built-up enemy or multiple sneaky little ones.

We’ve all come a long way since She Who Wins was dominating LoR, and since she was restricted to only hit Followers, She has mostly Wandered out of people’s decks. We still want her to be a top-rate finisher, and letting her disrupt the opposing gameplan more effectively will hopefully give her a role as a late game option.

The Sheriff has a strong effect when she enters play, but was often unable to lay down the law effectively on her own. With a few extra stats, we think she’ll be a more effective answer for Bilgewater decks looking to answer larger units.

As we were looking at how to enable more interaction for various regions, we realized that these two premier combat tricks were a big part of what made it feel so hard to answer opposing threats. While we like that both Twin Disciplines and Sharpsight are both great defensive answers to removal, the fact that they were also excellent on offense meant that decks could include them without losing any aggression. This change should push players to have a harder choice between protecting their units and including tools that end the game on the spot.

The King has a potent effect when his son is around, but hasn’t been much of a ruler in his own right. With a little more power, he can do more to hold the throne.

CHANGE: Effect is no longer consumed by units that already have Challenger.

This is a small change that should hopefully keep Valor from stealing Quinn’s banner all the time. Darn bird.

Sacred Protector makes a pretty exciting promise, but does little to deliver it on its own. We wanted to help you not just find Shen, but get him closer to a devastating Level 2 attack.

While we don’t want Sigil of Malice to become a premier damage spell without Reputation, it can afford to be a little less embarrassing. NOTE: This change only affects the base cost - the cost after Reputation is still 1.

Flashbombs are a potent part of the Traps strategy, but shuffling them into a larger pool of cards could often leave you wondering where all those traps actually went. This change should let your bombs pay off more consistently.

Careful Preparation can let Predict pull off some really exciting and tricky plays, but it was just too expensive to typically make the cut.

While Camphor and Pantheon might not get along, we didn’t like that they also asked you to track two different (but very similar) forms of targeting allies. It was also looking doubtful that Camphor would find a place in any decks at her current statline, so we decided to also give her a slight boost.

This patch, we’re introducing the first of a suite of gameplay UX updates, which we’re colloquially referring to as “Premonition.”

In patch 3.4.0, we’re introducing the following updates, which you can see in action in the video above!

We have more of these updates on the way in future patches, aimed at further improving overall game clarity & consistency, so let us know if you have feedback once the patch goes live to help us continue to shape future UX updates!

The following personalization items are available with this patch. 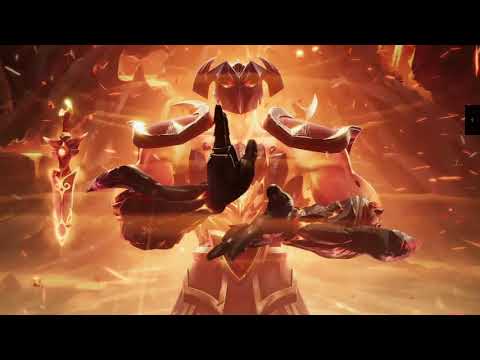 Alternate Art + New Effects for Mark of the Storm

This board has special visual effects and music.

Who needs a furnace when you’ve got this little critter?

Hobby: Swimming through hoops of fire

Don’t get him too fired up, if you value your things.

The Infernal Remnants Bundle is available in the Store, prorated for any items you already own. Bundle includes:

The Fiery Kin Bundle is available in the Store, prorated for any items you already own. Bundle includes:

The Unbreakable Shields Deck Bundle is available in the Store, prorated for any items you already own. Additional Details:

Protect your allies from enemy attacks with Barriers and sturdy petricite. None can stop the Formidable army!

- Get your profile to add and share decks
- Connect your Riot account to get match history and deck stats
SIGN UP NOW
PrevPreviousLearning New Decks: Mastery Curves (in collaboration with Legna)
NextDay One Decks – Five new decks to try out for Patch 3.4.0!Next