Welcome to the first edition of Meta Monday, where we take a look at the most dominant decks in the past 7 days and why they are currently on the top of the meta. We will also try to identify dark horses and predict what decks could be promising to move into this week.

Welcome to the first edition of Meta Monday, where we take a look at the most dominant decks in the past 7 days and why they are currently on the top of the meta. We will also try to identify dark horses and predict what decks could be promising to move into this week. 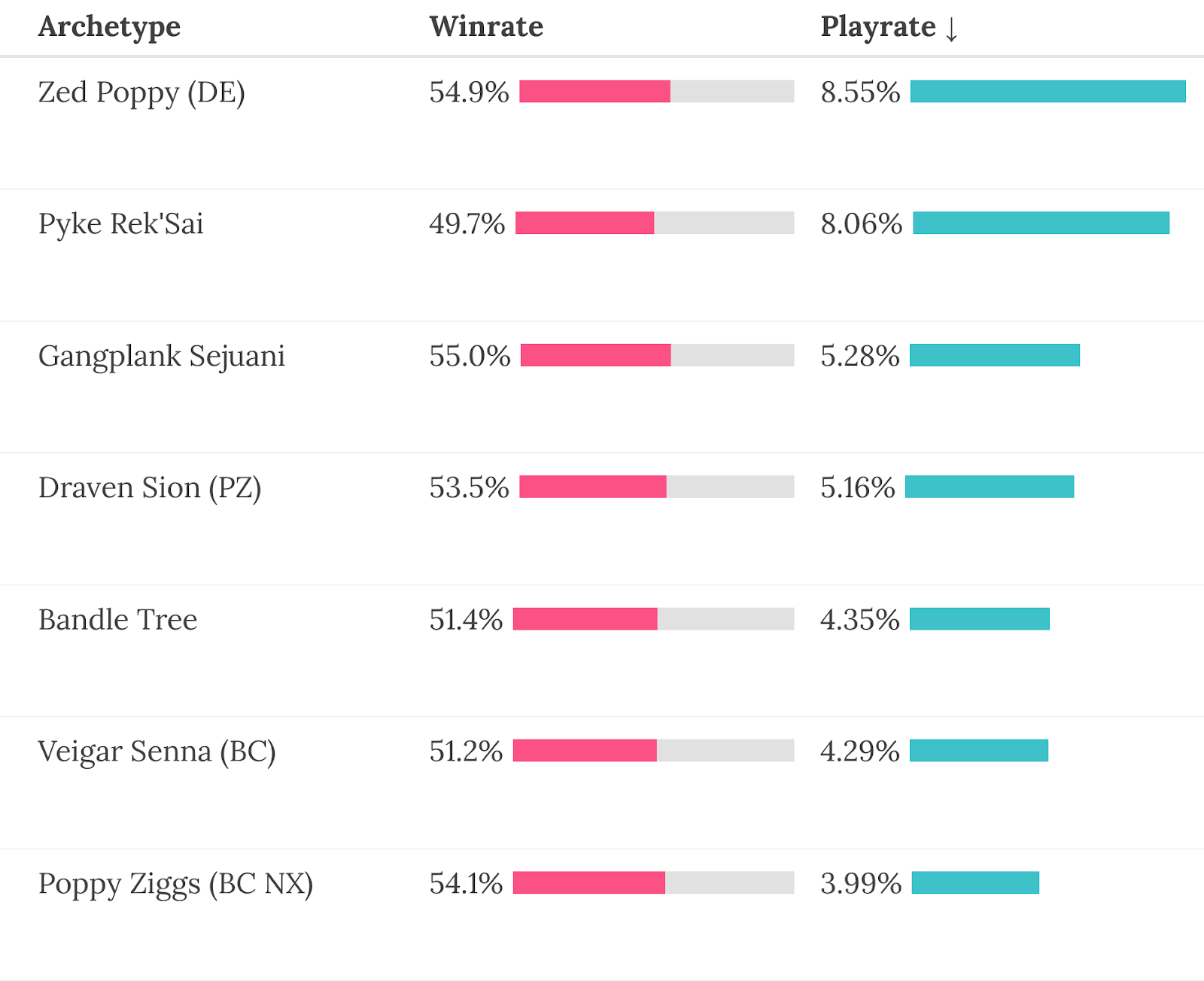 If we take a look at Balco’s Meta Tier List, we can see that Zed/Poppy and Pyke/Reksai are the clear top dogs of the meta when it comes to play-rate, with GP/Sej and Draven/Sion coming in second at a 5% play-rate. 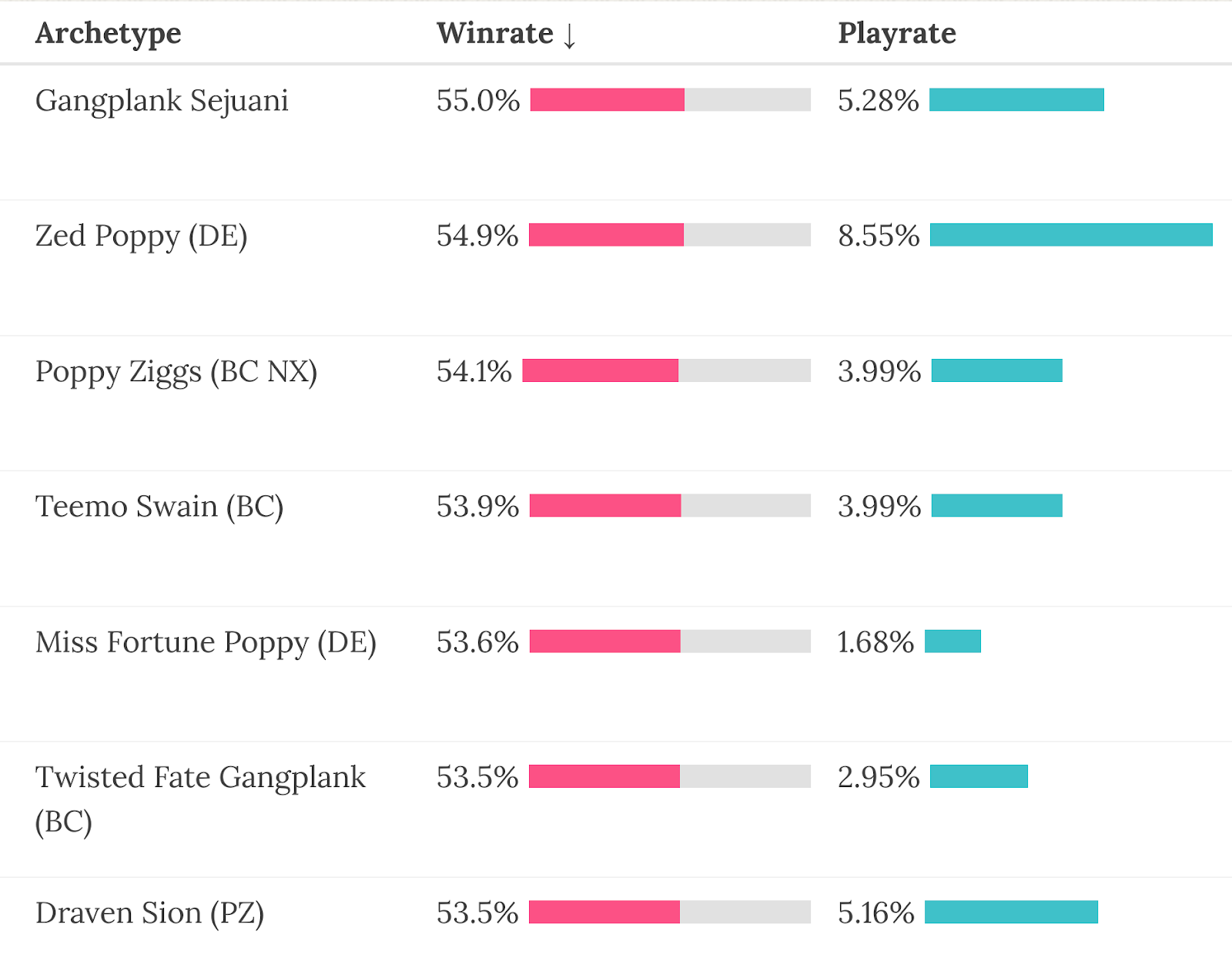 Looking at win rates though, we see quite a different image. While GP/Sej and Zed/Poppy stay on top, the Lurk archetype is nowhere to be found. In its place, we can find well-known decks like Poppy/Ziggs Burn and TF/GP Ping City, but also lesser-known ones like Teemo/Swain and Poppy/MF.

Lurk being the second most played deck has historic reasons. At the start of patch 2.18, we saw an influx of dragon decks, which falls prey to Lurk staring at a whopping 71.2% win rate in favor of Lurk.

Looking at Poppy/Zed, we can see in Legna’s Match Ups Data that this deck has a lot of good matchups well above a 60% win rate, most importantly a 60.9% win rate against Lurk.

If we take a look at Draven/Sion, we see win rates that are almost exclusively opposite to those of Poppy/Zed, with Lurk and Dragons being a common strong point for the two decks. In a nutshell, Draven/Sion covers the part of the ladder that Zed/Poppy doesn’t and vice versa.

Furthermore, GP/Sej has similar to Poppy/Zed almost only good matchups in the current meta, although less explosive highs, but also less depressing lows. Besides Poppy/Zed, there is currently no good counter to this archetype!

More aggressive decks like Poppy/MF and Poppy/Ziggs on the other hand have high hopes. One of the reasons they have these high win rates is due to their favorable matchup into Poppy/Zed, the most-played deck.

The differences between those decks come in Poppy/Ziggs notably having a good matchup into Lurk, the second most-played deck, while MF/Poppy having overall more good matchups.

Finally, decks like Senna/Veigar and Bandle Tree variants seem to just scrape by with an above 50% overall win percentage, but don’t seem to hit the right spot in the meta. They probably see these high play rates because people know those decks and how to pilot them.

Legna and Balco even go the extra mile to create the LoR-Meta Index (LMI), or the Meta Score respectively in their regular meta reports. Today we will take a look at the LMI, which can be found here. Keep in mind that this data is from November 3rd, so the numbers look a little different from today’s but the message stays the same. 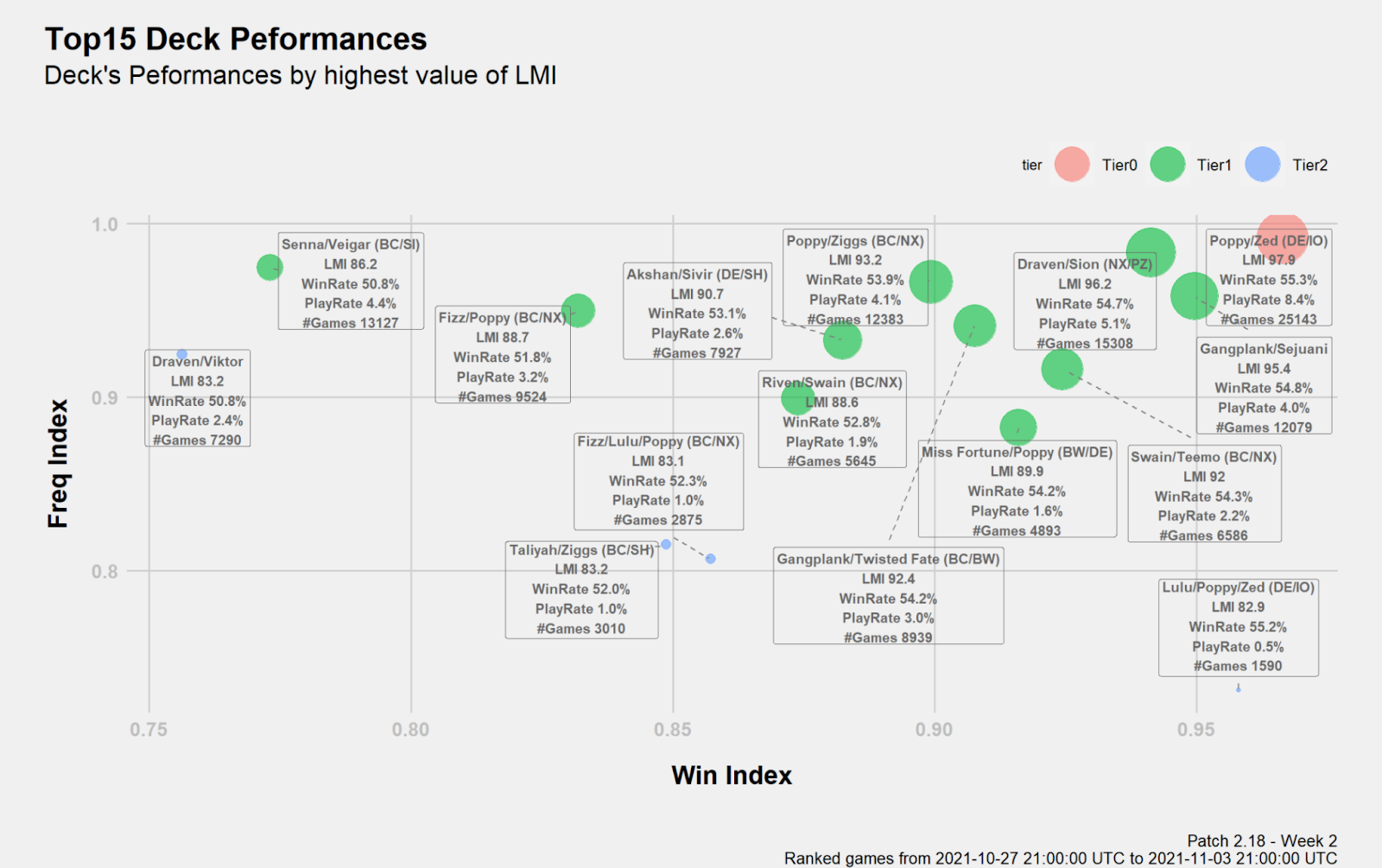 The future looks grim for Pyke/Rek’sai. There is no good reason why this deck should stay since Dragons are long gone from the ladder and it only takes a good beating from most of the other decks. It will be interesting to see how the meta adapts – if at all – once Lurk vanishes from the scene.

Poppy/Zed on the other hand seems like a clear winner. It stands at the top of the play and win rate and has no comparable competitor.

To me though, it is a big question mark. We can see a resurgence of the old guard like GP/TF and new inventions like Teemo/Swain that feast on this particular deck. It is difficult to take a good guess here, but for now, it seems like a good idea to try some of the dark brew to counter this deck.

Draven/Sion seems to have recovered from its nerf to Draven

and change to Twinblade Revenant and its win and play rate check out. It seems especially promising as it has good matchups into counter decks of Poppy/Zed if you want to go 5Head.

GP/Sej appears to be a meta-stable as well, that is here to stay. It should have a bright future with its few and far-between bad matchups and could see yet another rise in play rate.

If it wasn’t clear, Dragons is a dead archetype that is countered by almost everything the meta has to offer. Don’t expect it to come back anytime soon.

Poppy/MF and Poppy/Ziggs seem a little underplayed for their win rates. They seem to be on a big upswing and we might just see a big influx of these aggro decks. If they should become meta-stable, we might see an adaptation of control decks to counter them…but that is getting way ahead of ourselves!

Thank you for reading this week’s Meta Monday. Big thanks go to Legna and Balco for their amazing meta reports. Without them, projects like these wouldn’t be possible. Thanks also go to Herko Kerghans who pointed me in the right direction to find these valuable sources.

Lastly, if you liked the article and want to read more from me, you can check out my How to Math in LoR article.