Welcome to this week’s Monday Meta Report, where we take a look at the most dominant decks in the past 7 days and why they are currently on the top of the meta. We will also try to identify dark horses and predict what decks could be promising to move into this week. 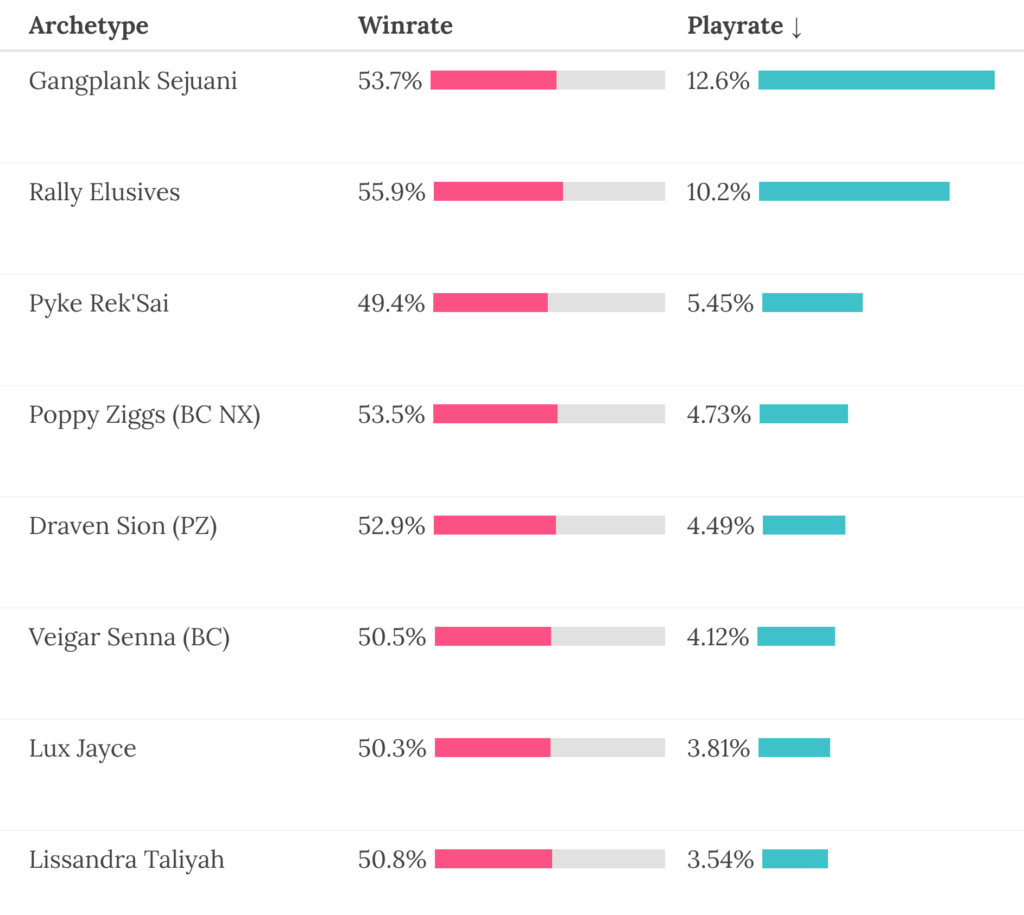 Taking a look at Balco’s Meta Tier List, there are two obvious favorites this week: GP/Sej and Rally Elusives. Together, they make up almost one-fourth of played decks on the ladder. The third most-played deck – Lurk – comes in at only half the playrate of the second most played deck. Poppy/Ziggs, Draven/Sion, and Darkness make the 4% cut while Lux/Jayce and Liss/Taliyah are the only decks with a 3% playrate. 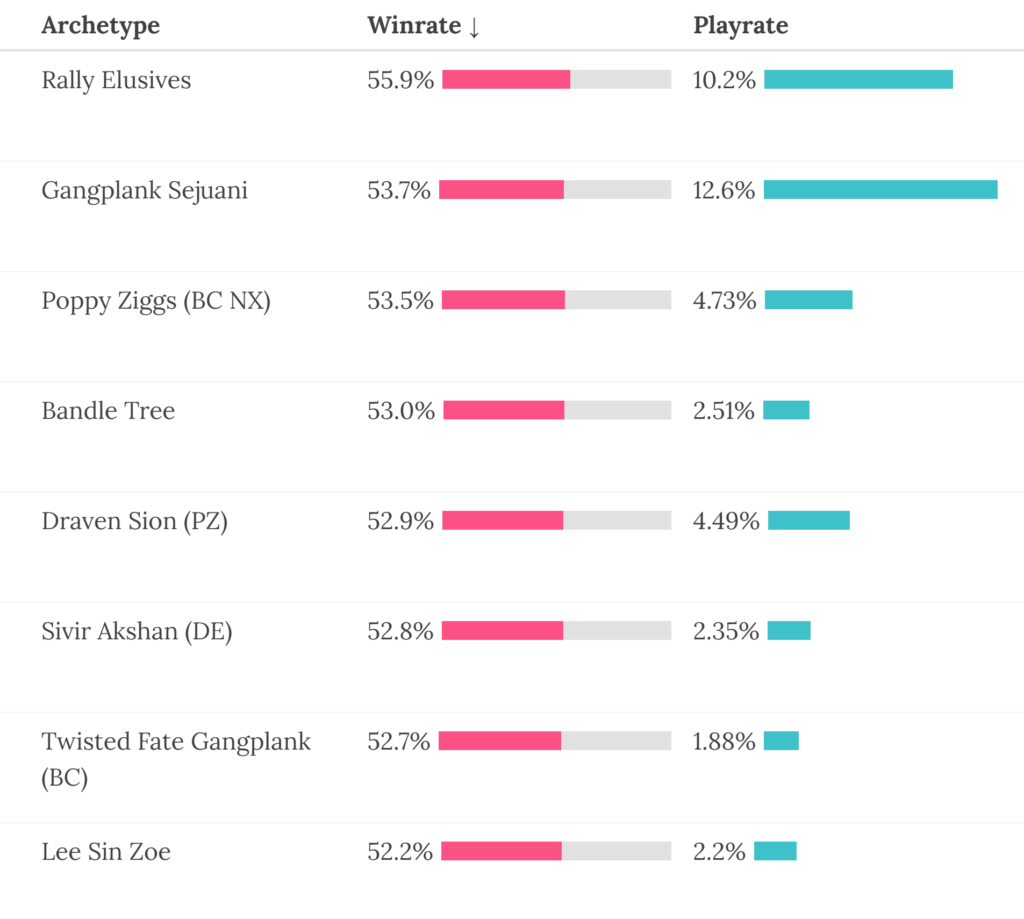 Looking at the win rate, Rally Elusives has been off the hook again with an almost 56% win rate. Only with a 53% win rate, we can see the next decks in GP/Sej, Poppy/Ziggs, and Bandle Tree. After that, the only decks with a 52% win rate are Draven/Sion, Sivir/Akshan, GP/TF, and Lee/Zoe.

As we have discussed the above meta decks in detail during the last two meta reports, we will only shortly revisit some of the major points:

GP/Sej has been an absolute powerhouse when it comes to match-up spread, having few and far between bad match-ups – Rally Elusives being the most noteworthy one.

Rally Elusives, or Poppy/Zed(/Lulu), has a lot of heavily favored match-ups above the 60% mark earning itself a place besides GP/Sej as a meta giant.

Draven/Sion can be considered the counterpart to Rally Elusives, as in that they beat mostly everything that Rally Elusives don’t beat and vice versa.

Lurk is good into Jayce/Lux and Liss/Taliyah. It was once popular when Dragons were around and kind of never went away (Seriously, why is this deck still here?!)

Jayce/Lux is okay into Rally/Elusives and is favored into Darkness and Liss/Taliyah. It’s mostly being played because Jayce is a new champion.

Liss/Taliyah has some polarizing matchups, most notably a very good one into Plunder and a horrendous one into Rally Elusives.

Let’s look at the matchup table of Bandle Tree (Fizz/Poppy):

We see that most importantly, it has an acceptable 49% win rate into the most played deck – Plunder. It shines into decks like Senna/Veigar and Lee/Zoe that either get devastated by Minimorph or rely on slowly out grinding their opponent, not being able to finish the game before The Bandle Tree comes down. It’s unfavored into tempo-based decks like Poppy/Zed and Draven/Sion that can bypass their swarm units with Elusive or Fearsome.

When looking into Darkness, we only see pitch black. Looking at the matchup table of Senna/Veigar though, we see an acceptable matchup into Plunder and a great one into Draven/Sion and Lee/Zoe, who struggle to deal with the removal and Minimorph

. Like many other decks, Darkness also bows down to Rally Elusives, keeping its win rate in check.

For more matchups, you can also visit our Matchup Table.

This is the part where we look at last week’s report and check if our predictions have come true. If they haven’t, we will look at how the data differ and why.

We said that GP/Sej is the deck to beat and well… it was beaten. By a well-known challenger all the more – Rally Elusives. Does this mean that GP/Sej is going away?

This also checks off our next point. Rally Elusives is still here – even with the Jayce decks mostly gone from the ladder – and oh boy is it banging.

The said Jayce decks mostly vanished from the ladder, though we still see Jayce/Lux being played a little bit. Is it a justified deck to be still played or is it only a leftover from last week’s hype train that will vanish completely come next week?

Draven/Sion still hasn’t found its equilibrium. Its play rate went up to 4.5%, but this time the win rate fell to around 53%. I think this probably has something to do with the rise in popularity of Lee/Zoe and Darkness. Remember though that we are discussing a shift of a mere 1% in total play- and win rate, at this point people could have just felt it more to play the deck.

Poppy/Ziggs still had a great week and its drop-in win rate – from 55% to 53.5% – probably stems from all the fish leaving the puddle, or other put, Jayce decks with a below 50% win make up win rate play rate represented being played.

Bandle Tree seems to have not only worked because of the Jayce inflation. The same goes for Akshan/Sivir. They have unique matchup tables that beat the most meta decks other than GP/Sej and Elusive Rallies.

Legna and Balco even go the extra mile to create the LoR-Meta Index (LMI), or the Meta Score respectively in their regular meta reports. Today, we will take a look at the LMI, which can be found here. Keep in mind that this data is from November 17th, so the numbers look a little different from today’s but the message stays the same. 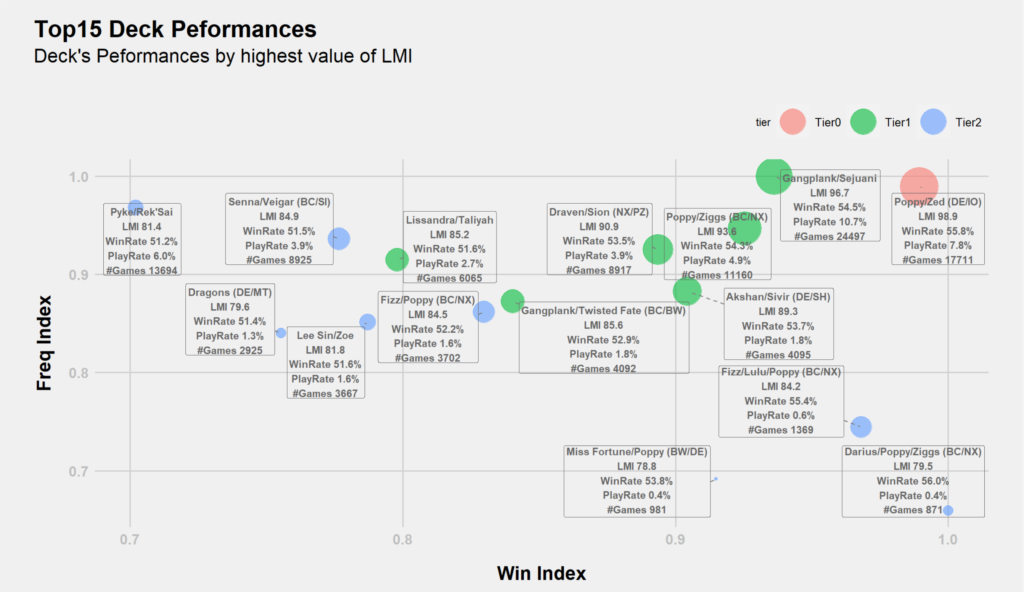 We can see that Lurk is considered a Tier 2 deck and for good reason. It does do winning, but there simply are better options to play. If you want quick games and an easy to learn deck, I recommend trying out Poppy/Ziggs.

Poppy Ziggs is the best non-mainstream deck at the moment and there is no reason for this deck to go away. It only has trouble into Draven/Sion, Lee/Zoe, and GP/TF, which combined make up only around 8.5% of the ladder.

Naturally, Poppy/Zed is considered a Tier 0 deck with its almost 56% winrate and favored matchup into the most played deck on the ladder. Maybe playing counter decks like Teemo/Swain into this ladder state might be a good idea!

Above, we proposed the question of whether the Rally Elusives dominance means that GP/Sej will see a decrease in playrate. I don’t believe so – at least not in a big drop. The fact stands that GP/Sej has close to no bad matchups besides Rally Elusives. A rise in the playrate of Lee/Zoe and Liss/Taliyah might indicate otherwise though.

While Bandle Tree seems to be only a tier 2 deck by last Wednesday, today’s numbers indicate that this deck is worth picking up. It has a competitive win rate and only two popular bad matchups – Rally Elusives and Sion/Draven.

Akshan/Sivir and Draven/Sion on the other hand are considered Tier 1 decks and today’s data complies with that. They have good win rates and good matchups. Sivir/Akshan more into less popular decks and Draven/Sion into some of the more popular decks with a decisive win rate. I think these decks will stay in the meta for good and Akshan/Sivir is due to see a rise in play rate. I personally really enjoy playing Akshan/Sivir as there are a lot of different ways to set up lethal and it has a high skill ceiling – there is so much to learn from this deck!

Liss/Taliyah has received a lot of hype in the last couple of weeks, due to its good win rate into GP/Sej. With its heavy weakness into Rally Elusives and Poppy/Ziggs though, I don’t think that it will become any better at winning.

Talking about dark horses, one could look at Jayce/Vi SI. The difficulty always comes from not having a big sample size and missing a complete matchup table. The deck has a 57% win rate into Poppy/Ziggs and a 51.6% one into Rally Elusives. It also has an acceptable win rate of 48% into GP/Sej. Try this deck at your own risk!

Thank you for reading this week’s issue of Monday Meta Report. As always, big thanks to Balco and Legna for making this report possible in the first place with their valuable meta reports. Also, thank you again for the continued positive feedback on these articles. I will give my best to make this series as insightful as possible for you!