Are you looking for the best decks in this week's meta-game? Leer takes a deep dive into the data to show you what decks you should play and those you should prepare to face!

Welcome to the second edition of the Monday meta Report, where we take a look at the most dominant decks in the past 7 days and why they are currently on the top of the meta. We will also try to identify dark horses and predict what decks could be promising to move into this week. 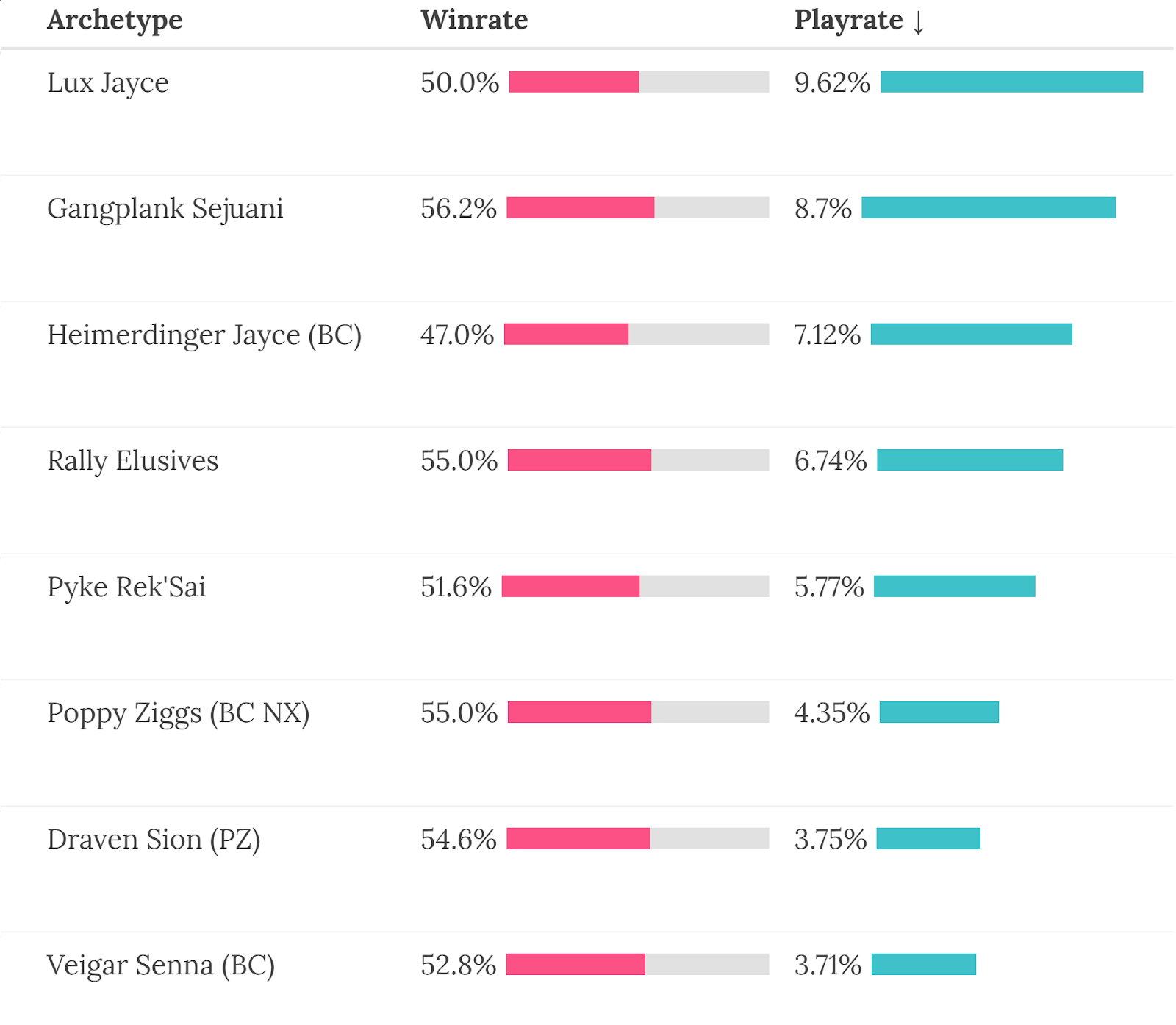 Taking a look at Balco’s Meta Tier List, we can identify two community-favored decks: Lux/Jayce and Heimerdinger/Jayce. GP/Sej also comes in as a close second considering playrate. Rally Elusives and Lurk see high playrates as well, while Poppy/Ziggs, Draven/Sion, and Darkness hover around a 4% one. 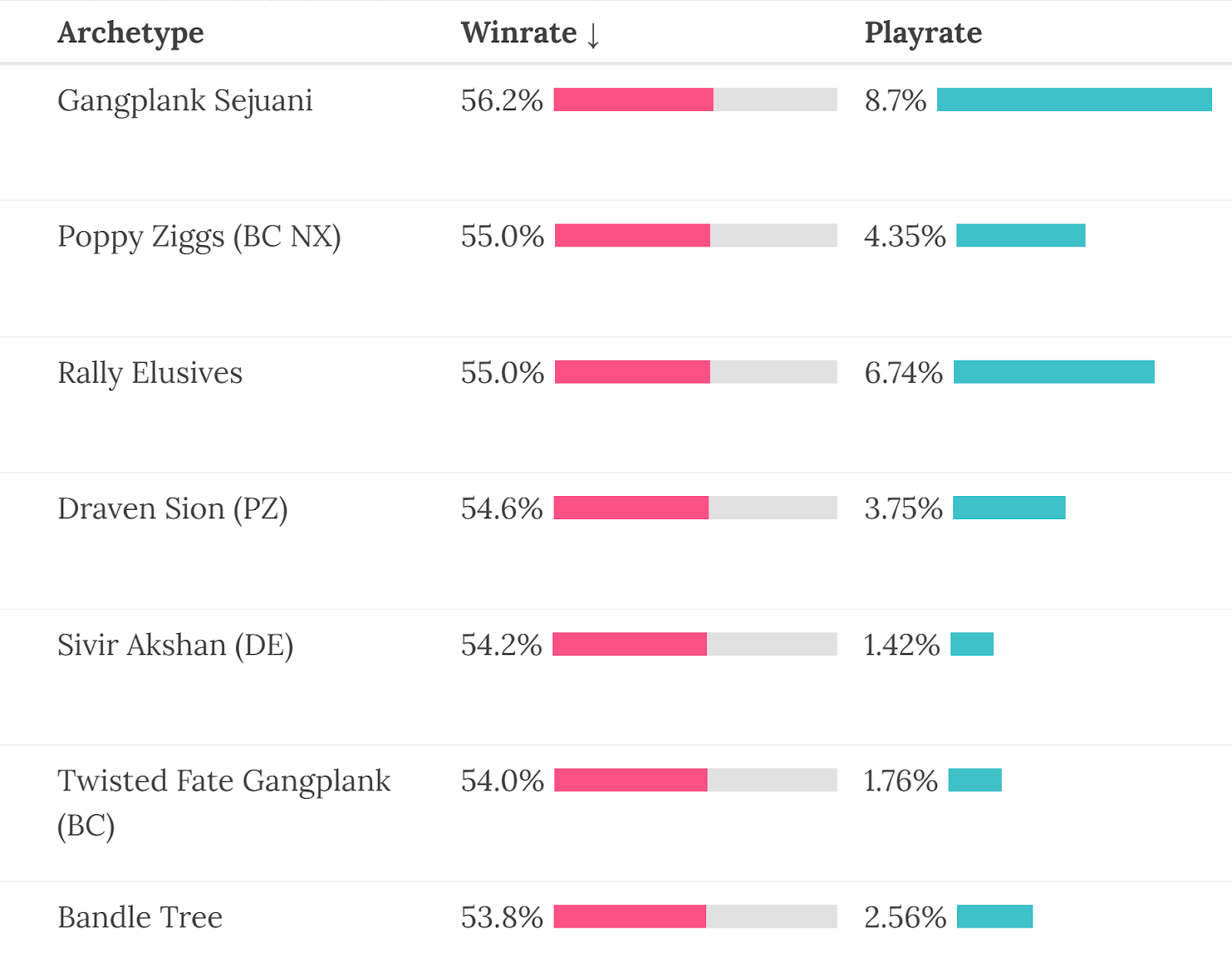 Looking at win rates, we see a similar image at the top with GP/Sej being the clear winner. Poppy/Ziggs Burn and Rally Elusives still find a 55% win rate sharp, whereas Draven/Sion, Sivir/Akshan, and Ping City find a 54% one. Most notably, Jayce decks are nowhere to be found.

I urge new readers to catch up on last week’s report, as we will not go into detail on most of the decks covered there for the reasons section. Nonetheless, we will quickly revisit some facts:

GP/Sej has been an absolute powerhouse when it comes to match-up spread, having few and far between bad match-ups – Rally Elusives being the most noteworthy one.

Rally Elusives, or Poppy/Zed(/Lulu), has a lot of heavily favored match-ups above the 60% mark earning itself a place beside GP/Sej as a meta giant.

Draven/Sion can be considered the counterpart to Rally Elusives, as in that they beat mostly everything that Rally Elusives don’t beat and vice versa.

Moving to newer decks for this format, it’s no surprise that Jayce decks have seen an enormous playrate, combined at over 17%. Jayce was just released this week and is being tried out in a multitude of decks – regardless of its success.

Looking at Akshan/Sivir, we see that this deck performs well against everything that isn’t GP/Sej or Draven/Sion. Most importantly, it farms the overplayed Jayce archetype.

GP/TF on the other hand performs very well into aggressive decks like Draven/Sion and Poppy/Ziggs Burn. It also falls prey to its counters though, like Darkness or Lee/Zoe keeping it at a somewhat reasonable 54% win rate.

This is the part where we look at last week’s report and check if our predictions have come true. If they haven’t, we will look at how the data differs and why.

Looking at Pyke/Rek’sai, we’ve seen its playrate coming down quite a lot like we predicted, though it remains at a 5.7% playrate with a solid 51.6% win rate. Is this a justifiable playrate for the just okayish win rate? I don’t think so.

Quite opposite of this development, GP/Sej has seen our expected rise in playrate (and even win rate!) due to its almost non-existent counters.

Coming to Rally Elusives, I think something very interesting has taken place. Last week, we have seen a rise in counter decks like Swain/Teemo or GP/TF, which should infer a fall in play- or at least win rate of Rally Elusives. Instead though, the playrate only went down by a little bit and its win rate improved a tiny bit. In only Master rank, the winrate even skyrocketed to 60%.

What I believe explains this situation is that the dramatic increase in popularity gained by GP/Sej, as well as Jayce archetypes, has boosted the playrate of decks that fall prey to Rally Elusives. Also, these decks have good match-ups into Swain/Teemo and GP/TF, decreasing their overall playrate.

I think this shows just how volatile the meta can be with Rally Elusives right at its center.

We also predicted that MF/Poppy and Poppy/Ziggs would become played more. While this holds true for the Ziggs Burn deck, the MF archetype wasn’t so lucky. To be honest, I don’t really know why this deck appears to have vanished from the meta. Maybe it has something to do with the fact that I tried it out on the ladder and was demoted from Diamond II to Diamond IV…

Since The Path of Champions update just dropped this Wednesday and the Meta Report of Balco and Legna were created during that day, they couldn’t capture the influence that Jayce decks had on the meta. Thus, we will forgo those reports only this week.

GP/Sej seems to be an established meta-stable and is currently the deck to beat. While decks like Lissandra Thralls and Lee/Zoe are potential counters, their overall match-up spread is too bad to make them consistent decks for the meta. Although, if you queue them at the right time of the day, you might find a lot of success with them.

Personally, I am a big Lee/Zoe lover but in the current meta, this deck can be very frustrating to play. There are match-ups like Darkness and Bandle Tree that feel straight-up unwinnable due to Aloof Travelers Looking at Rally Elusives, there seems no way that this deck will go anywhere if GP/Sej stays on top of the meta. Once again though, like with Lurk, it will be interesting to see how this fact changes if the Jayce decks lose their popularity.

…Bringing us to said Jayce decks. Like with Lurk, they have zero reasons to be played this much with their win rates and should vanish quickly. Though I am excited to see if there emerges a refined Jayce list that finds a place in the meta.

Draven/Sion really seems to have found its unique place in the meta and even saw a boost in win rate compared to last week. The playrate though confusingly went down, I think this is a deck that should definitely get played more!

Poppy/Ziggs is also completely off the hook and destroys everything that isn’t built to counter it. I actually have found a lot of success on the ladder with this deck the past few days, climbing from Diamond IV to Diamond I. I think it is especially attractive for its easy learning curve, you basically just have to be able to count down from 20 to 0 to play this deck 🙂

Coming to Bandle Tree, or Fizz/Poppy, it gets a little… complicated. It kinda gets smacked by all of the meta stables, but still saw a rise in winrate to 53.8%. I believe this has something to do with its good match-ups into Jayce decks, so try this deck at your own risk. We will have to wait until next week to see if this deck is worth its salt.

Lastly, I would like to talk about Akshan/Sivir. This deck might fall into the same category as Bandle Tree, as in that it might be only good at the moment because of the Jayce inflation. On the other hand though, it has great match-ups into decks that counter aggro lists, like Darkness, GP/TF, and Lee/Zoe, while also maintaining an acceptable win rate against GP/Sej. As far as my personal experience goes, I climbed from Diamond I to Masters with this deck, so it might be worth a shot!

Thank you for reading this week’s issue of Monday Meta Report. As always, big thanks to Balco and Legna for making this report possible in the first place with their valuable meta reports.

Also, thank you for all the positive feedback on last week’s report. I will give my best to make this series as insightful as possible for you!