Looking for a bit of mid-week direction in your climb or lineups? Here are the strongest Ladder decks according to the data, and two strong lineups from our 100 Dollar Daily Tournaments with brief comments from their pilots. Interesting bit of news: according to Balco, during the last 3 days no deck is above 55% WR and 1% PR at Plat+.

These are the new Chamption archetypes with a winrate (WR) above 54% at Plat+ in the last 3 days.

Interesting times to be a-laddering: a Timelines deck at the top, with no signs of losing steam.

In fact, it's been quite some time since we've seen an archetype reach a perfect 100.00 Meta score (having both the biggest WR and largest playrate among the meta decks) -- a feat that the former Queen and King of the Meta, Ahri Kennen Shurima, never achieved. has propelled this archetype to new heights -- the recommended list, with 600+ games played, has sky-high WR.

Surprise! A not-Gnar deck among the three best new decks! =)

These two old staples are very much alive and kicking. having become mainstays of this old archetype. s is one copy (along with maximum amount of burn) -- the recommended list is by 2-3% the best among the most popular.

Rummaging for a couple of options among the not-so-seen decks, we find Draven Rumble, with a whooping 55% WR (and not a single new card)...

… and good ol' Kindred Sentinels, which -- judging by the different lists -- is undergoing a lots of experimentation, and performs at 54% WR overall.

If you want to play what the cool Twitter kids are playing (and taking to Masters), here are three options -- pilots beware, success with these lists may have something to do with who was behind the steering wheel.

Brokenball reached Masters with Ballistic Bot Overwhelm -- he also published a guide about it here.

Zorig Dungu went on a 200 LP streak and reached top #7 with FilthyGamerWeeb's Shen/Galio:

Maybenextime definitely got to Masters with Teemo Tristana Gnar YiA, after borrowing the list from Oneiric:

… with Meganoz borrowing it from him, and repeating the take-it-to-Masters feat.

Money on the Lineups

Any tips for prospective pilots?

"When in doubt," says WhatAmI, "go full degenerate control. You're targeting anything aggressive or midrange and looking to ban Tree, Darkness, and Scouts in that order. This is the lineup for if you find decimate terrifying and wish them to feel your fear."

RyanEffinMiles got second place… twice in a row! (on Monday, then again on Tuesday).

The cool twist? His lineups' inspiration (which he used both days, with a few tweaks) was the pilot he faced in the first finals: WhatAmI.

"My lineup was a variation of WhatAmI's papercraft AkGnar OTK, Lee Sin, and Galio Shyvana Dragons," says Ryan. "The meta has a lot of Bandle City in it, whether it's Tree, anything Gnar, or YiA/Chompers variants, and they all have one thing in common - they gum up the board with 2/1s or 2/2s that replace themself, stop your damage, and outvalue with them.

"So I just played 3 decks that have Overwhelm units, but can also keep up in value."

This is Ryan's Monday's Lineup, if you want to check it for reference:

And here is his Tuesday's lineup:

"Akshan Gnar has explosive lethals against anything with limited interaction," Ryan says, "but also plays a lot of one- and two-drops to gum up the board and match other bandle decks.

"It feels like it plays similar to Lee Sin, and I'm still not sure what it's bad into, and felt like the least targetable Gnar deck."

"Lee Sin is a meta staple," says Ryan, "and doesn't require much talking - I guess my variant is that I only play 3 Eye of the Dragon because Eye alone practically beats the Bandle Tree decks, so max spells is key. Priestess is to find landmark removal for Bandle Tree." as much as possible -- he gets huge off of eating Bandle's two-drops and swings for huge lethals with Dragon's Clutch. They can't Minimorph Will the third time be the charm for Ryan?

Well see… if you run into him in one of the Daily Tournaments, at least you know what he'll (probably) bring! =) 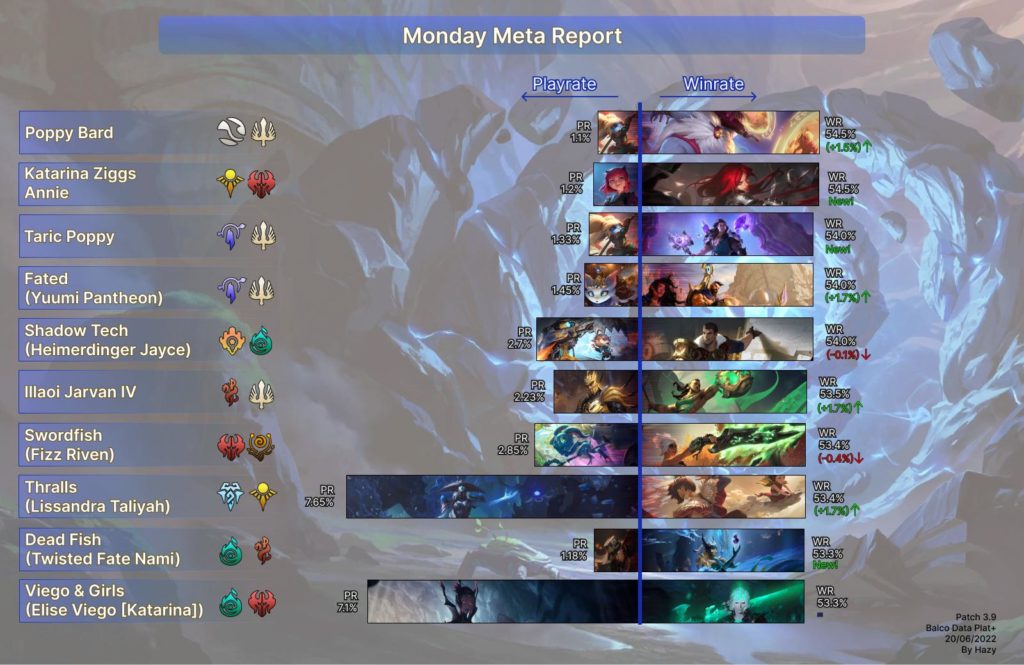