Welcome to this new Monday LoR Meta Report, where we take a look at the most dominant decks in the past 7 days and why they are currently on top of the meta. 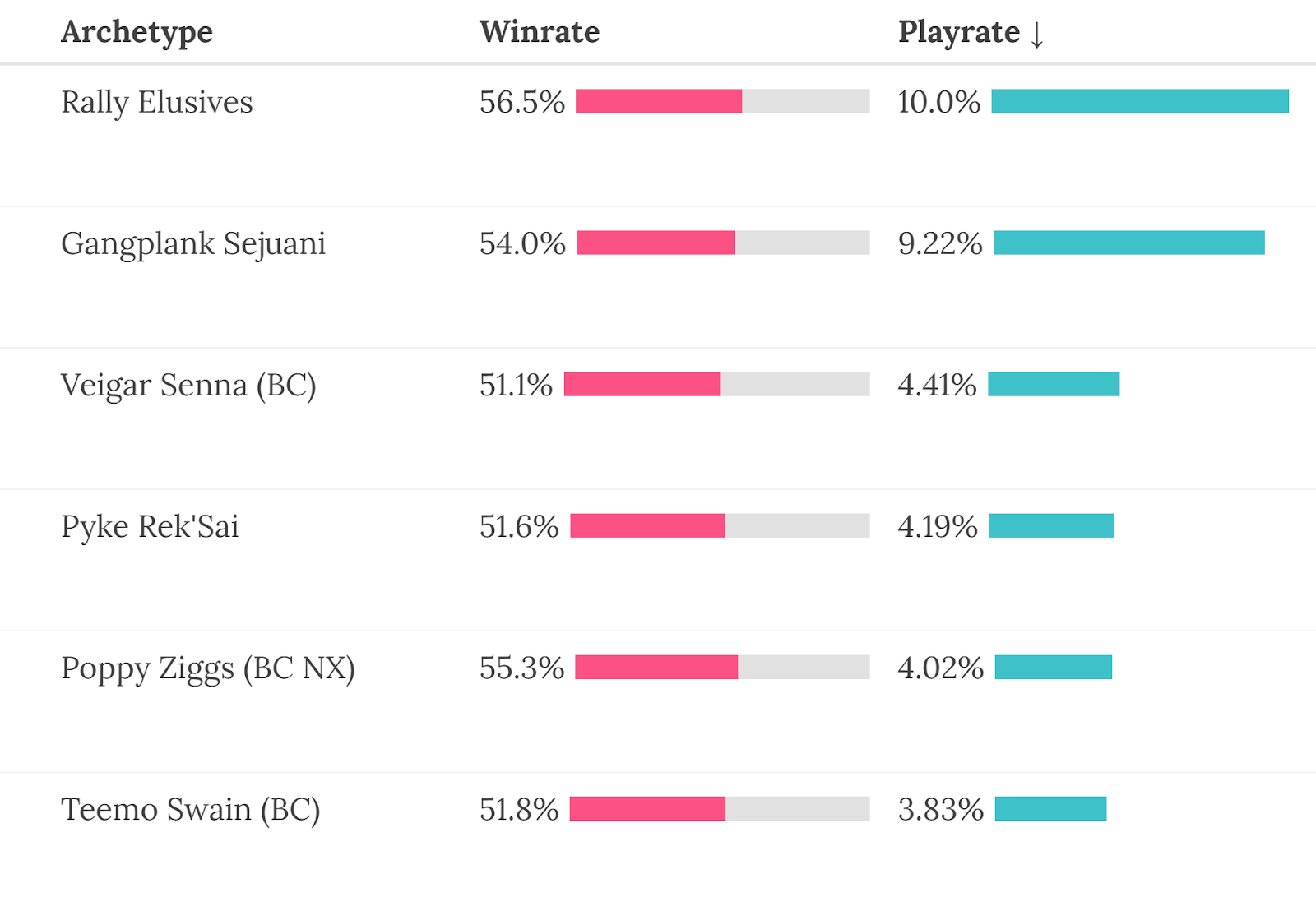 Taking a look at Balco’s
Meta Tier List, we are not surprised to see Rally Elusives and Plunder still at the top with a 10% and 9% play rate, respectively. Darkness is the third most-played deck this week, closely followed by Lurk and Poppy/Ziggs all with a 4% play rate. Teemo/Swain is the only deck below them with a 3% play rate. 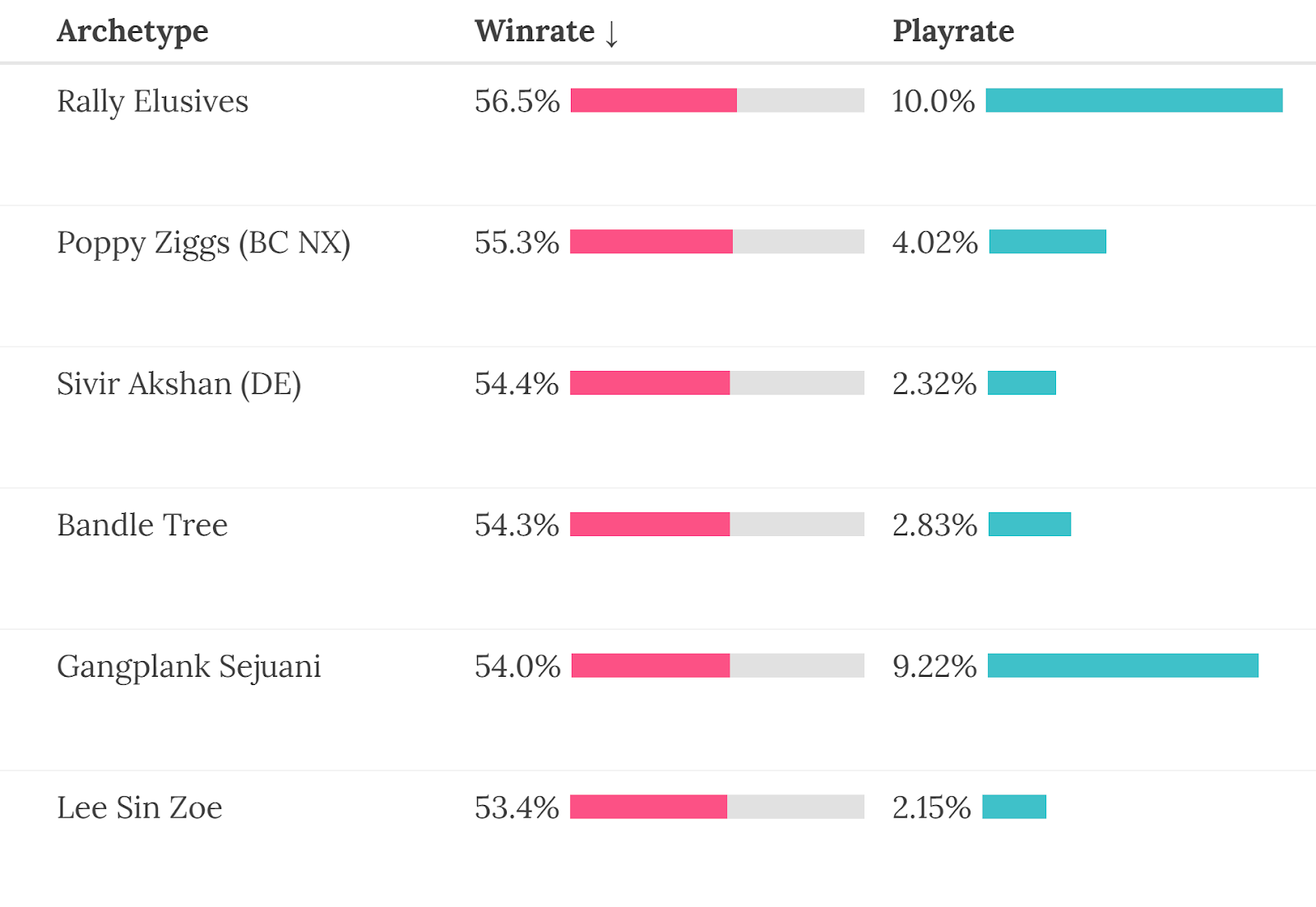 Regarding Winrate, Rally Elusives remains uncontested with a 56% one. Poppy/Ziggs fought its way up to 55%, while the win rate of Sivir/Akshan and Bandle Tree rose to 54%. Plunder also maintains a 54% win rate, while Lee/Zoe is the only deck with a 53% one.

This week is special in that it was in between two ranked seasons, thus the match-making rating – especially in the Master tier – didn’t matter anymore. The stats were taken from Plat+ games since in Plat and Diamond rank there was still a motivation for the players to climb/win games.

This brings us to the following point: A lot of the decks played this week were not competitive. Rather, they were more fun to play. We can see that for example in the high play rate of decks like Darkness or Lurk with a mediocre win rate.

As it happens, lots of these not-so-competitive decks get eaten alive by decks that can win quickly. Like, very quickly before the opponent can say Aurelion Sol thrice. Elusives Rally, Poppy/Ziggs, and Akshan/Sivir fulfill that criteria.

Lee/Zoe on the other hand benefits from a rise in aggressive burn decks like Poppy/Ziggs on the ladder and also does fine into Plunder. It also works well into slower decks that are not-so-competitive, because they can’t shut down the combo of Lee Sin

Bandle Tree (Fizz/Poppy) on the other hand is tricky. It has some good matchups into slower decks like Darkness with its endless creation of chump blockers and inevitable The Bandle Tree win condition. It also performs well into combo decks like Lee/Zoe due to Minimorph but falls prey to decks that can outpace it while avoiding its chump blockers, like Rally Elusives does through elusive units or Akshan/Sivir through the Overwhelm and Fearsome keywords.

Remember when we discussed Taliyah/Ziggs and Poppy/Lux last week? Yeah, me neither ‘cause they are gone from the meta. They were like that toddler that was excited to show you what they drew and made you promise to hang it on your wall. Only for you to hang that collection of abstract lines in your old room at your parent’s house. Which would be torn down the week after. How dare you…

Anyways, coming to more enjoyable news, Teemo/Swain pushed through this week and outperformed TF/GP in beating Rally Elusives. They seem to be favored for now as they also perform well into midrange decks like Bandle Tree or Lee/Zoe.

So about that Jayce Sentinels archetype, I told you to play… I lost 150 LP with that deck this week 🙂 It seems to continue performing well though with a 52% overall win rate. Since it got a little more popular this week, we finally get a more thorough matchup table:

One thing that is observed through a glance is the following: this deck has polarizing matchups. It smacks Rally Elusives, Poppy/Ziggs, and Teemo/Swain but gets wrecked by almost everything else. Only Plunder is a close to 50% win rate matchup. The deck is great at shutting down early aggression but falters in deploying its win condition against decks with a long breath.

Jokes on you, there is no prediction for what’s coming next. Go check out some of the Magic Misadventures spoiler season reviews by Monte or Jason in the Latest Articles section on the front page.

With Magic Misadventures right around the corner on December 8th, hopefully, a new and refreshing meta cycle will emerge. I am very excited to see what new archetypes will evolve and analyze all of them!

I hope you enjoyed this season as much as I did – writing these reports was an amazing experience. I am very grateful for this opportunity and the positive feedback I got from colleagues and you the readers.

Huge thanks go to Jason Fleurant, he’s creating so many opportunities for a variety of people in the LoR community, be it through this website, organizing tournaments, or writing open letters to Riot on Organized Play. He cares deeply about the game.

And thank you so much for reading and showing these reports lots of encouragement, it means a lot! As always, big thanks also go to Balco and Legna for making this a possibility in the first place with their incredible meta reports!