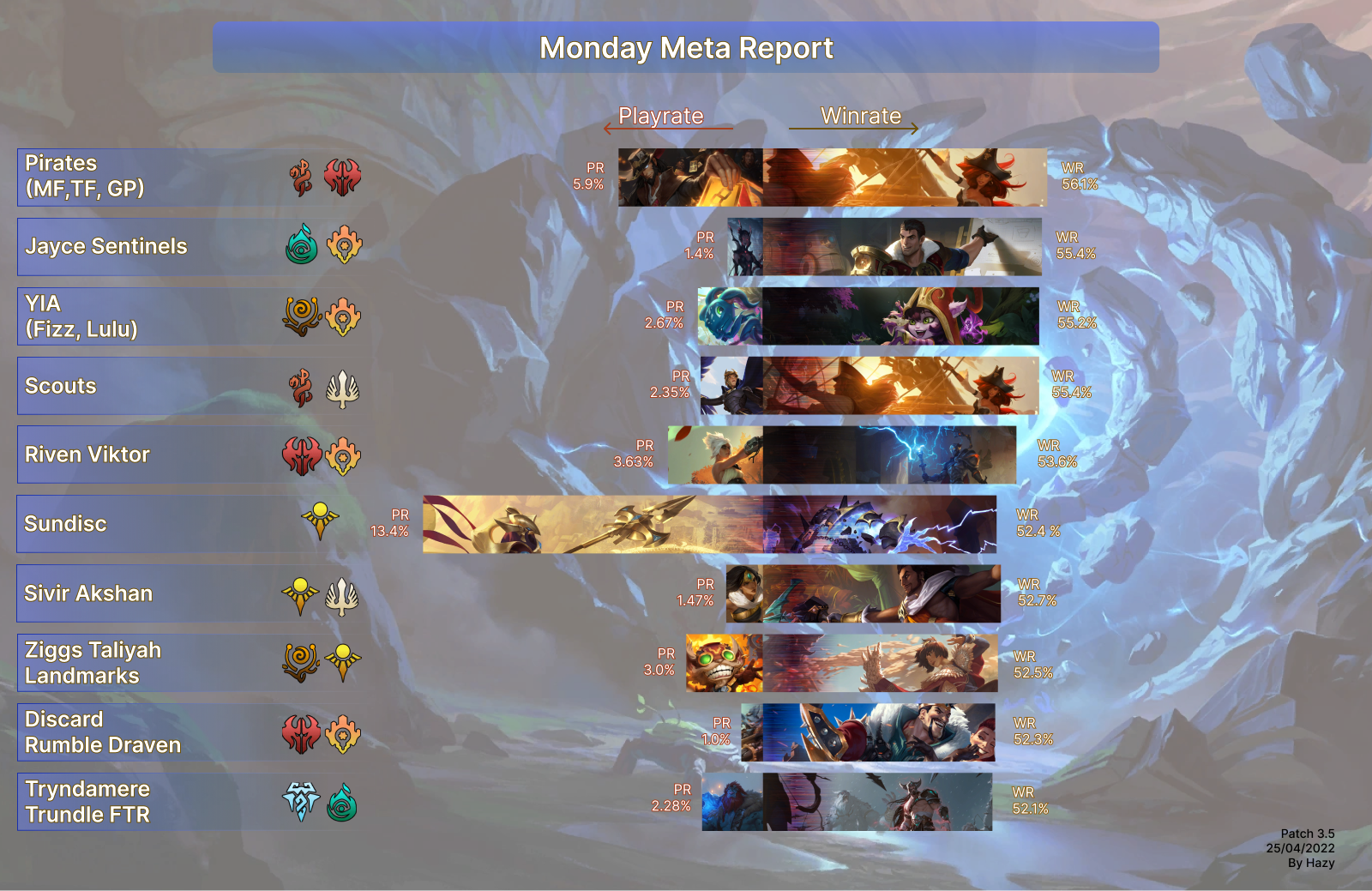 What’s up! With two days before a balance patch, let’s take a look at the current state of the ladder as of April 25th and figure out where it’s heading!

I'd appreciate it if you could fill out this survey (link) to improve the Monday Meta Report. It takes less than a minute to complete! =)

Azir Xerath (Sun Disc/Mono Shurima) remains the obvious #1 with a 13.4% PR, growing back 2% that was lost in the past weeks.

Miss Fortune Twisted Fate Gangplank (Pirates) is on a steady uphill trend, growing to an almost 6% PR and taking #2 this week!

Riven Viktor continues its downward trend and got demoted to a 3.6% PR. Meanwhile, Taliyah Ziggs holds on to a 3% PR similar to last week.

After this follows a multitude of 2% PR archetypes. Since you are here for decklists, I will name them and link to a common deck list =)

Below that, there is MF Quinn (Scouts), Tryndamere Trundle (FTR), Ekko Zilean (Predict), and Ramp Asol.

An entirely new archetype (at least for this season) makes an entrance to this week’s stats – Elise Jayce Vi (Sentinels) with a convincing 55.4% WR!

After that, we find a flock of archetypes with a 52% WR:

Sun Disc, Sivir Akshan, and Taliyah Ziggs are above the 52.5% mark…

…with Draven Rumble, FTR, and Lee Sin Viktor below that!

Riven Viktor’s PR keeps dropping, and with that Sun Disk’s WR is rising again. Since Sun Disk had a 52.5% WR last week, it’s only natural that its PR would increase again.

The question then is (and which I have been avoiding last week) – Why is Riven Viktor going away?

As always, to answer this question we have to look at its matchup table:

Here, I’ve included all decks with a PR above 3%. Doesn't look so bad, huh? After all, Riven Viktor still takes top 5 spots in PR and WR for a good reason.

Previously, the 20% PR of Sun Disc definitely played a big part in Riven Viktor’s success. With Mono Shurima dropping down harshly to around a 12% PR, Riven Viktor is slowly adapting to the new environment (as in, it’s slowly bleeding play- and winrate).

If we look at Riven Viktor’s matchup against decks with a 2% PR, we see quite a different image though:

Suddenly, the deck isn’t looking so hot anymore, huh? Fizz Lulu, Aphel Vik, and Scouts are pretty unfavored matchups for the deck, while FTR and Predict are only slightly favored. Together, these archetypes make a relevant difference and are the reason Riven Viktor is in free fall.

So what about the future of the deck, will it stabilize at some point?

The more sophisticated answer, pretending there is no patch, is it’s not looking great. Sivir Akshan and Jayce Sentinels are two of the rising stars this week (in Akshan Sivir’s case: since last week).

Both decks do extremely well versus Riven Viktor. Since a high WR is usually followed by a rise in PR, Riven Viktor might see even more bad matchups get popular in the coming time!

Because Pirates has been the hot take since last week and we covered that archetype in last week’s report, let’s look at the second most winning deck – Sentinels.

As we can see they have been gatekept by Sun Disc previously, but are now beating almost every archetype found on the ladder.

Sentinels has a pretty polarized matchup table – it either beats the crap out of aggro thanks to its SI removal spells and removal-focused archetypes like Aphel Viktor, that lack a way to close out the game.

Or it loses the game in the loading screen, facing Mono Shurima, against which it can’t finish the game fast enough before Ascension.

With Pirates gaining so much traction, Riven Viktor still being in the meta, and Draven Rumble lurking in the shadows, Sentinels has pretty solid hunting grounds.

While it can be frustrating to pilot Sentinels, I invite you to try it yourself and see how it goes! Once you learn some basic patterns of when to open pass, the archetype can feel rewarding, and the stats speak for themselves!

The current rank 3 of the AM leaderboard – DrCheckov42 – piloted this brew. While it definitely isn’t new this week, it has a pretty good matchup table favored against Sun Disc and Taliyah Ziggs. It seems to be pretty even versus aggro decks, while Demacian archetypes are its biggest counter.

Furthermore, it plays Give It All , a card you probably never even heard of until now. What better reason to try a deck than try some cheesy winning conditions that will surely surprise your opponent! =)

Just like with the above deck, Poppy DE PnZ has been piloted by an AM Masters player – ptash – to rank 6 of the leaderboard.

It appears to be a hybrid of Fizz Lulu and Scouts – two archetypes that are doing extremely well on the ladder currently.

It features cheap and sturdy units of Demacia like Petricite Broadwing

, the Rally effect of Golden Aegis discard combo, and flexible removal/burn in cards like Get Excited! seems to be a meme champion at first glance, it makes this deck stronger than the parts of its sum – especially the 1-attack buff to Flame Chompers!

makes her quite valuable!

While Viego Shurima has been a thing ever since Viego got released, it has found some new breath in this meta. While it sucks versus Sun Disc (36% WR), it has some compelling matchups.

It does well against Demacian archetypes and some more classical control decks like FTR or Ramp Asol (above 60% WR). It also has an even matchup against aggro decks, which the ladder is slowly getting flooded with.

Viego SH is definitely not setting any bars in the current meta, but it is very solid, and rank 16 of the APAC shard has been piloting this one! If you want to experience an old deck with a unique Encroaching Mist playstyle, you don't wanna miss this!

Thank you for reading this week's meta report and making it this far. If you’re still here and read this, leave a “Hi” in the Reddit thread comments (link), I will “Hi” you back! =)

The talented Hazy has been converting Balco's data into these (hopefully for you) enjoyable graphs for the Monday Meta Report, I can't express my gratitude enough to him!

Thanks also go to Hydroflare and Gregory The Grey, they have been doing lots of editing and proofreading that deserves appreciation!!