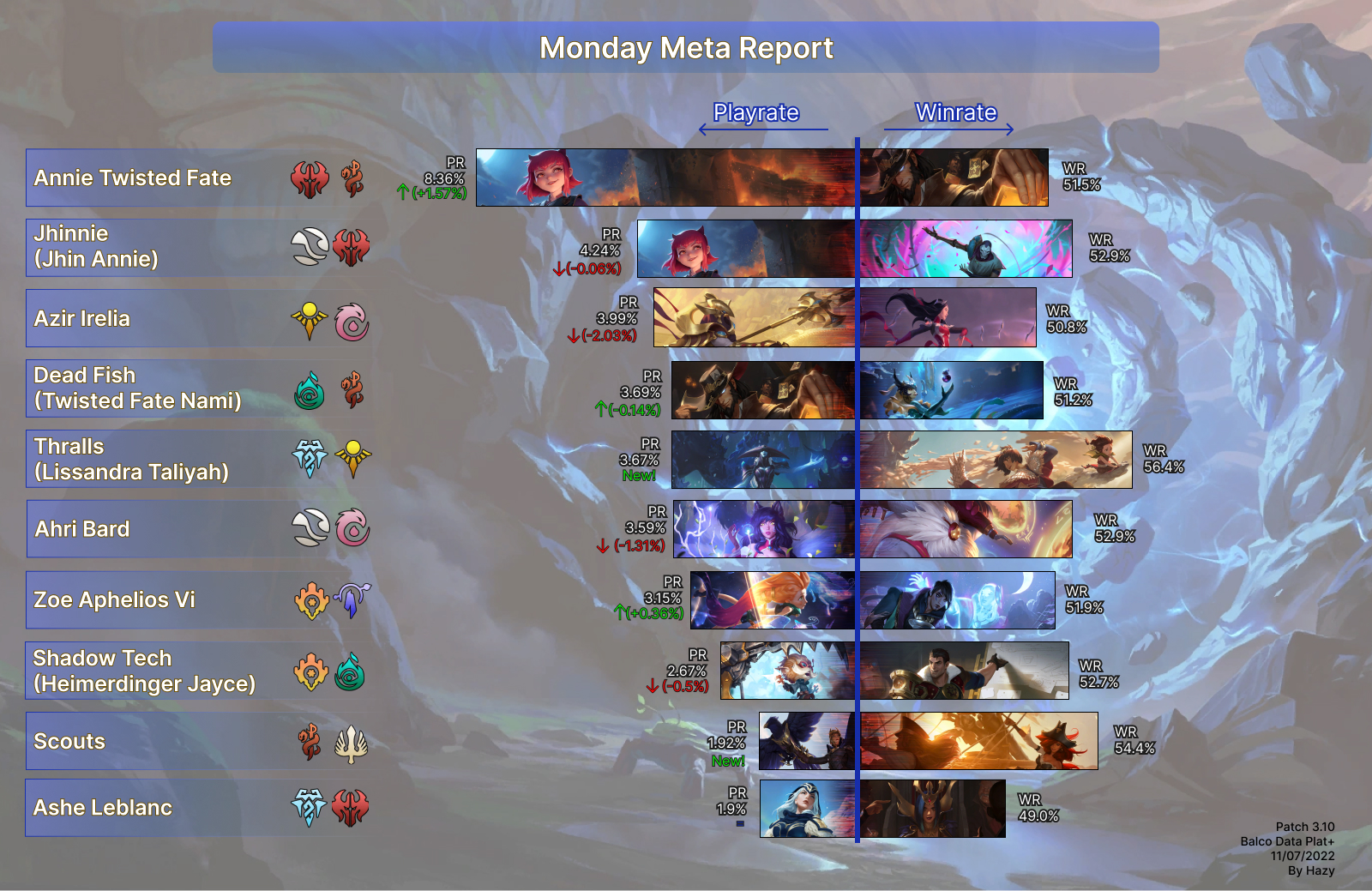 This is an older report -- for the latest Monday Meta Report, check this link!

‘sup everyone. Thralls is back from the dead and wreaking havoc. I’m scared shitless, please don't bring it to Seasonals! =)

Annie Twisted Fate (Twisted Annie) has grown its lead as the most played deck and now sports an 8% PR.

On the other hand, Azir Irelia has declined quite a bit in the PR department, barely holding an above-50% WR, and is now sharing a 4% PR with Annie Jhin (Jhinnie).

Nami TF (Dead Fish) climbed to #4 this week due to Ahri Bard taking back some of that spike in PR from last week.

Lissandra Taliyah (Thralls) has been successfully resurrected and steps back into the game with a 3.6% PR.

While Zoe Aphelios Vi is the last deck with a 3% PR, Heimerdinger Jayce (Shadow Tech) is the only archetype with a 2% PR.

Finally, we can still find Ashe LeBlanc in #10 with a 1.9% PR, while Scouts (Miss Fortune Quinn) has also made a comeback into the meta, sitting at a 1.9% PR as well.

Thralls takes the crown this week with a breathtaking 56.4% WR, all the while having a fairly high PR!

Poppy Taric, an older archetype from the beginning of the season, makes its best Thralls impression and comes out of nowhere with a 55% WR! With Scouts coming in #4, that makes it four out of four new decks topping the WR chart this week!

Meanwhile, Bard archetypes have been struggling this week, as we can see in Bard Poppy Jarvan and Bard Ahri losing quite a lot of WR points, falling to around a 53% WR (which is still not bad, just worse than last week! =).

Jhinnie has also taken a hit and now rests at around a 53% WR, while Shadow Tech is the last deck making top cut, with a 52.7% WR!

Remember how last week, we talked about the success of Twisted Annie thanks to the absence of Thralls? Well, seems like a certain ice queen has been readin’ my meta reports! =)

Thralls has an unholy 74% WR against the by far most played archetype of the meta. Even if Twisted Annie plays Scorched Earth , Thralls doesn’t give them many units to remove, which Twisted Annie specializes in, so advancing Ravenbloom Conservatory becomes difficult for them. Nerfs or not, this matchup alone is a very convincing reason to play the deck!

But as we can see, Thralls also performs great against Dead Fish, another meta staple, and Aphelios decks.

They only struggle with Azir Irelia, which is on the downclimb, and Jhinnie. While Thralls seems to have many polarized matchups (as in, we either heavily win, or heavily lose them), it has more positive than negative ones and thus is the most winning deck this week!

Poppy Taric is back.

Why was it away in the first place?

That’s a difficult question to answer. If you specialize in Demacia decks, like me, you might ask yourself why Poppy Taric is on an uptrend, but Bard Poppy on a downtrend. That is a question we can answer! =)

As we can see, both decks have a pretty great matchup table in the current meta – the only weakness in the top six played decks is Twisted Annie (... which arguably isn’t a bad matchup at a close to 50% WR).

One could look at this and say: Oh, both decks have almost only green in their matchup tables, they are the same!

To which some would reply “stfu, they are not, open your eyes, n00b” and punch the first person in the face. Which then would result in a bar fight and me calling the police.

The more refined answer to that first person would be: “The difference lies in the nuance, my friend!”

While indeed both decks have a great matchup spread and you should play them on ladder, Taric Poppy wins most good matchups more heavily than its Bardian sibling.

For example against Dead Fish and Thralls: Thanks to Mountain Sojourners and the infamous double-Rally from Taric , we can end the game quicker than Bard Poppy, just before Dead Fish has a pop-off turn with Nami , or Thralls can melt their Frozen Thrall This comes at the cost of a worse matchup into Jhinnie though – Bard Poppy plays more early units like Byrd, The Bellringer which crucially help the deck survive against early aggro, alongside some lucky Chime Another archetype that has made a comeback is Scouts. Despite the hurtful nerfs to Brightsteel Protector , the deck is still kickin’ butts!

This is Poppy Taric all over again! =)

As one immediately notices, the matchup table against the six most popular decks is exclusively green.

Scouts demolish aggro decks like Jhinnie thanks to their early tempo and more sturdy units than aggro, but also combo/medium burn archetypes like Azir Irelia thanks to their high-health blockers and tempo.

Oh, and they beat Elusive lists that kind of do what they want, like Ahri Bard and Dead Fish. And even control like Twisted Annie! =)

You might ask: Is there something that Scouts is bad against? The surprising answer is yes. But that is stuff like Pantheon Yuumi and removal-heavy stuff like Ezreal Caitlyn, which now are gone from the meta.

So while yes, Scouts were hurt by the nerfs, the hunters of Scouts were hit even more, and thus vanished. This means that Scouts has no overly popular bad matchups (Shadow Tech is the closest counter to them with a 2.6% PR)!

With the season coming to a close next week, now is the final chance to push for your desired rank. That might be reaching Platinum while you still hang about in Gold, or making a push for that sweet Master rank.

While the meta is slightly different in every rank, the general direction of which deck is good and which isn’t still holds. In this meta report, I have given you a broad overview of the best-performing decks – just pick one with a 53%+ WR and you’re good to go.

If you’re looking for even more decks for a fast climb, you can check out Herko’s By The Numbers – Best Decklists To Climb Fast article.

My personal choice for climbing would be Aphelios Viktor Vi. It is an incredibly fun deck to play that also wins a lot (third most winning deck this week). Don’t be fooled by your past experiences though – this is not the removal-focused Subpurrsible version, but rather Zoe Aphelios 2.0 with the The Winding Light

Said straightforward “flood your board and play The Winding Light

” gameplan proves extremely effective on ladder, while your champions add more depth to the archetype and give you more fuel against Twisted Annie for example.

Initially, Zoe Aphelios Vi was the best performing version, especially before the patch. But with Twisted Annie, Dead Fish, and Thralls emerging, the stats show that Viktor is the slightly superior choice, especially in the mirror match.

This week, we saw five out of the top six performing decks be the new old. It always takes time until the meta settles after a new patch, and this week is proof of that. PakiInPyjamas showcases the destructive power of Landmarks in his first MaRu article on Zilean Xerath. Bard has certainly lived up to his namesake, wandering pretty much everywhere… but if you’re tired of Tentacles and want a bit more boom, Zaun is where we want to land. By the Numbers – Current Fifteen Best Meta and Off-Meta Decks

Thralls, Monkeys, Tentacles… quite the motley crew, to keep mutated Abominations at bay!