Leer dives into the data to show you what decks you should play right now, and recaps the whole of the Worldwalker Season. 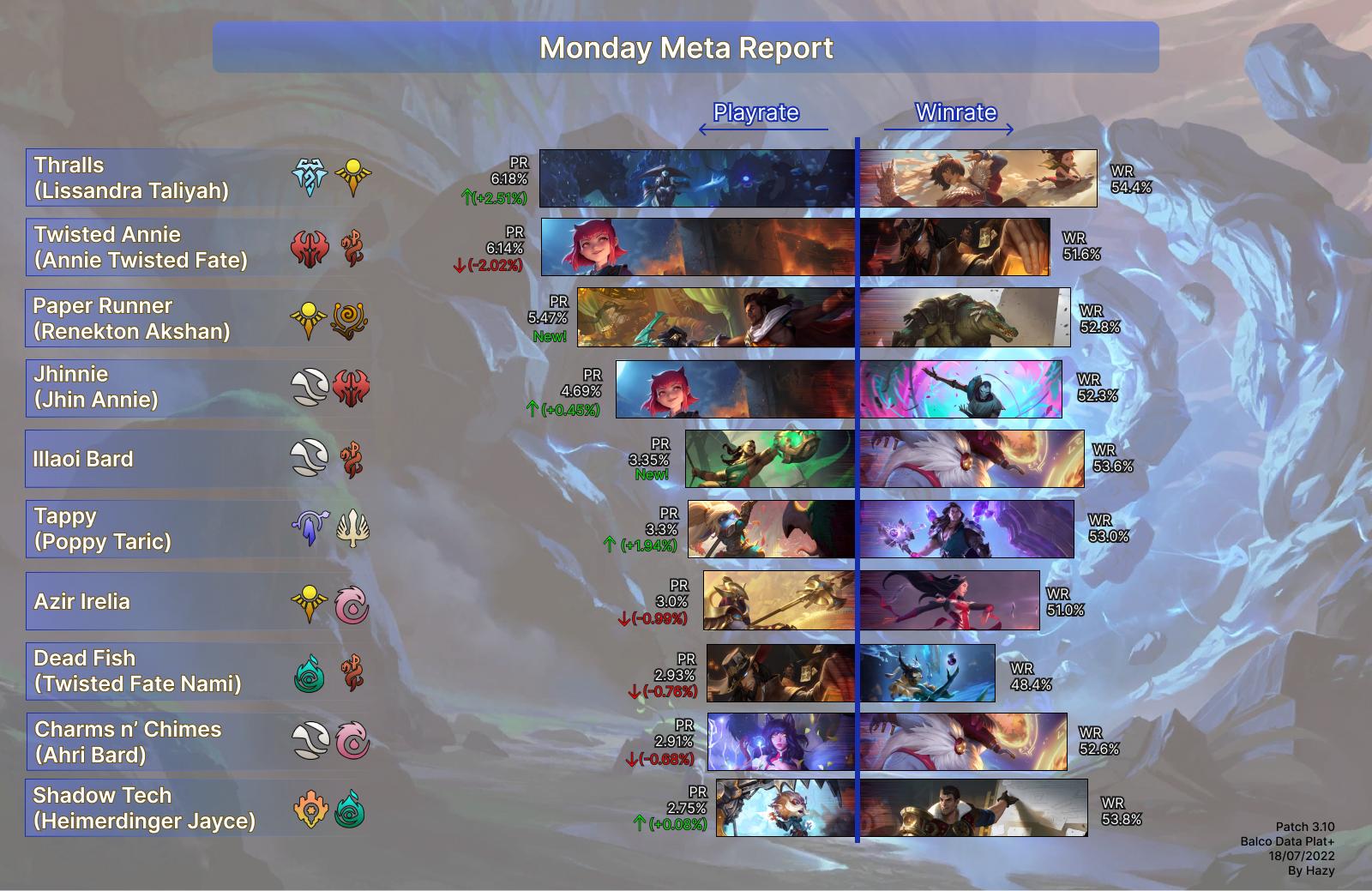 This is an older report -- for the latest Monday Meta Report, check this link!

‘sup everyone. The meta is seeing a lot of competitive new decks this week, which is quite unusual considering the approaching expansion. That being said, Forces From Beyond are looming ahead, which means it’s reminiscence time! =)

After their sudden return last week, we can see Lissandra Taliyah (Thralls) take over as the most played deck.

Annie TF (Twisted Annie) is not going down easy though, as both Thralls and Twisted Annie share a 6.1% PR.

Akshan Renekton (Blade Paper Runner) is another surprise right before the new expansion. As one of the most popular archetypes in Seasonals, it also makes an entrance into the ladder meta with a 5.5% PR!

Annie Jhin (Jhinnie) on the other hand remains in its PR at around 4.5%, with a slight uptrend.

Illaoi Bard is yet another new deck entering the playground, coming in with a solid 3.3% PR.

After Taric Poppy (Tappy ((Toppy?))) dominated last Monday’s WR chart, it also got some traction on the PR department and now sports a 3.3% PR.

Azir Irelia’s PR is finally going down, as they now sit at a 3% PR, which is 1% less than last Monday!

Nami Twisted Fate Shadow Isles (Dead Fish) has lost some of its momentum, only sitting at a 2.9% PR now. The exact same can be said for Ahri Bard!

With several new decks coming in, Ashe LeBlanc is finally nowhere to be seen on these graphs anymore! =)

Thralls is still the most winning deck, even after dropping a whole 2% WR, down to 54.4%!

Shadow Tech is back at the top with a 53.8% WR, just .2 percent before the novel Bard Illaoi archetype.

Riven Fizz (Swordfish) remained in its exact place at a 53.3% WR.

After Bard Illaoi, another Bard archetype makes an entrance into the charts – Jinx Bard (nickname wanted!). With a 53% WR sharp, it is the sixth most winning deck this week!

Taric Poppy had a short stay at the top, falling down to #7 this time around, though still maintaining a 53% WR. Personally, the deck has performed very well for me this season, being the deck I climbed to Masters with, and won almost all games it wasn’t banned in my Seasonal Open Rounds run.

Paper Runner was quite a menace a few days ago on ladder, but now equals out at a 52.8% WR. Especially this Seasonals we have seen a ton of it, being a somewhat last-minute epiphany, similar to the less popular Bard Illaoi.

Ahri Bard sports a 52.6% WR, remaining at a playable range, while Miss Fortune Quinn (Scouts) is yet another deck with horrible momentum, losing more than two points of its WR!

With the Seasonal Tournament concluded, Cards revealed, and Star Guardians approaching, let’s take a moment to look back and dwell in nostalgia. =)

On May 26th we got an expansion with brand new champs and a novel way to build decks – through Runeterra champions.

As usual, the new cards tended to get overplayed and it took players to figure out the best decks. Especially the Annie Jhin archetype, which we still see today with a reasonable WR, was unreasonably popular considering its WR back then.

It's here where we saw an Ionia Bard shell that would later evolve into Ahri Bard.

After the second week, the meta got more refined. We saw Jhinnie drop heavily in PR and a different Annie list, Annie Ezreal, take the spotlight. This is also the week where Thralls became the most played deck and would remain there for quite some time, fighting a fierce battle with Viego and his Noxian girls.

The third week of Worldwalker was one of my favorite ones for one reason alone – we got a deck called Demacia Fried Chicken. It was also here where we saw Fizz Riven prey on the popular Thralls and Viego decks, and charge up to become one of the most powerful weapons in tournament play.

In the following week, Shadow Tech would finally receive the acknowledgment it sought after. It had been one of the most winning archetypes all season up to this point, but had gone under the radar for a long time. There was also a unique control deck running Catalogue of Regrets The last week before the mid-season balance patch spelled a big upset on the ladder. Yet another Seasonal champion refined a deck and made it popular – this time it was Prodigy’s Poppy Bard Jarvan IV, which he called Bannerman Medley.

Twisted Fate Nami, mockingly named Dead Fish as a reference to Swordfish, also made a sudden appearance with increasing success on the ladder, especially in the hands of highly skilled players like Drisoth who hit rank one with the deck.

When the fire nation attacked patch 3.10 hit, everything changed. Many powerful archetypes, like Fated and Thralls were hit and a ton of cards were buffed. No, really, a ton. If you would take the amount of buffs given, and weigh them, you would literally get a ton.

Many of these buffs had little to no effect, while others changed the metagame. With Thralls vanishing and a Riptide Rex buff, Twisted Annie was no longer a niche deck but rather a popular reality. . Unfortunately, the hype over her buff was a little over the top and Azir Irelia didn’t find the success players wished for. Not everyone can have a cake and eat it too! =)

Just like at the beginning of the season, the meta needed a week to settle on more refined archetypes. It turned out that Thralls was not dead at all and preyed on the popular Twisted Annie.

Scouts was another deck that was thought to be dead due to massive nerfs to its early units but made a comeback nonetheless.

Also, Aphelios Zoe Vi – which would later transform into Aphelios Viktor Vi – was getting traction, a trend that would last into this very Seasonal Tournament, where it was the deck to either bring, ban or beat!

Finally, Thralls reclaimed its throne and proved that you don’t need a Promising Future to succeed in the present! =)

This season has been a blast, and it wouldn’t have been so for me without you readers! Writing these meta reports gives me a purpose, and you guys have been exceptionally receptive to my meta-analyses. From the bottom of my heart, thank you for being here and sharing your passion with me!

And as always, thank you for reading this week's meta report and making it this far. If you’re still here and read this, leave a “Hi” in the Reddit thread comments, I will “Hi” you back! =)