Leer dives into the data to show you what decks you should play, and recaps the whole of the Forces from Beyond Season. 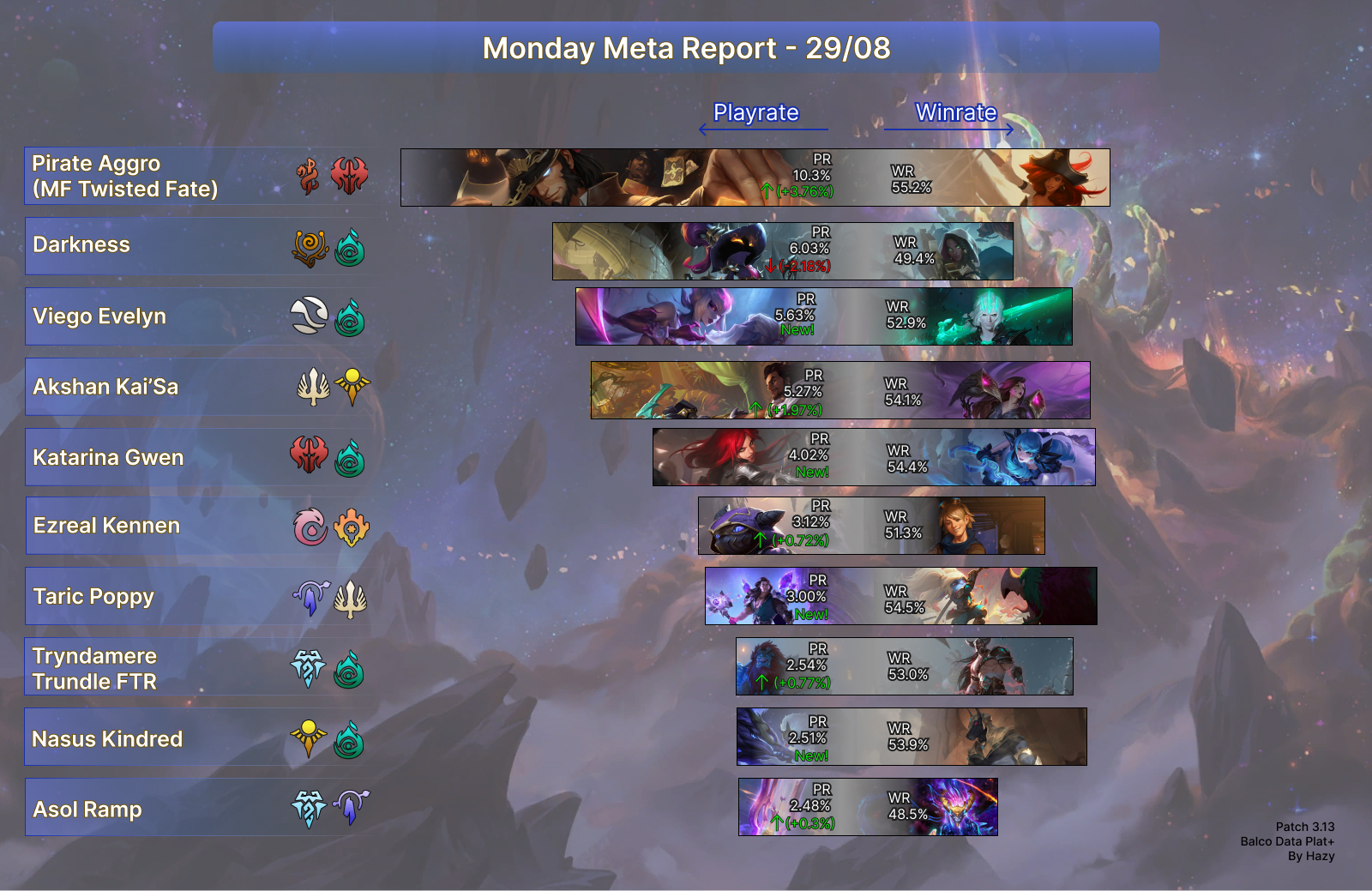 ‘sup everyone. Cards are being revealed and champions have been crowned. Congrats to the champions mic check, 4LW, and the APAC seasonal winner (背負拯救快攻卡組的使命之人)!

Let’s take a Rückblick (German for reminiscence) of the Forces From Beyond meta and dwell in nostalgia. =)

On July 20th the Forces From Beyond season began. We got three new champions, from which one was more powerful than the others. In fact, Kai’Sa would turn out to be the strongest champion in the entire game, by a mile!

But let’s start at the beginning and go Monday by Monday about how the meta developed:

As per usual, Azir Irelia received a buff in the previous patch and hence was the most popular. Akshan Kai’Sa showed signs of being busted, but the meta was too unrefined and chaotic to crystallize her real strength.

An indicator of this chaoticness is that Annie TF had a 58.4% WR, a deck that usually lingered around 51%. Another indicator was the multitude of Kai’Sa decks running rampant, like Viktor Kai’Sa and Evelynn Kai’Sa.

While Illaoi Bard was nowhere to be seen in the first week of the expansion, this fact should change quickly. While Sivir Kai’Sa was the better deck on paper, Mono Kai’Sa somehow fawned the players and was the more popular archetype.

In this week, Azir Irelia and Annie TF were still popular, but way less inflated in WR – a good sign for the meta.

We also saw another fan favorite deck return (besides Azir Irelia) – Yasuo Katarina! As somewhat of a counter deck of Kai’Sa variants (or at least one of the few archetypes that could stand toe to toe with Kai’Sa decks in the head-to-head ((not toe-to-toe! :P)) matchup), it would find a place in the meta for quite some time.

Three weeks into the season, problems began to emerge. Kai’Sa and Illaoi Bard were in a league of their own with unholy winrates when comparing them to their playrate.

They were so dominant, that archetypes uniquely built to counter them found success. Shen Bard was one of the most prominent decks of this idea, making use of the new Kinkou Student . It beat Bard Illaoi but pretty much nothing else at that time.

Old archetypes like Azir Irelia and Annie TF were pushed out of the meta, like, to be fair, almost all other decks besides the top two.

This was also the week where Teemo TF (Powder Monkeys) made an appearance.

Shortly before a new balance patch, Mono Kai’Sa seemed to have won the duel with Illaoi Bard. This was only true for the popularity though, as both decks shared a similarly busted WR of 55%!

Powder Monkeys turned out to be the new Annie TF, as in that it was very popular, but not that powerful in the ladder meta.

Thralls made a confusing comeback, which we explained through their extraordinary ability to smack unpopular decks at large, rather than due to Thralls’ overall strength against meta archetypes.

On August 17th we received one of the most-extensive balance patches in the history of LoR. Many cards were nerfed in the spirit of Riot RubinZoo’s patch philosophy to shake up the meta as much as possible.

While the most important (and obvious) nerfs hit Illaoi Bard and Kai’Sa, there were also some buffs The most meta-significant one being the revert of Twisted Catalyzer . As it was meant to be, Darkness would become the #1 most-played deck in the game once again.

The nerfs mostly resulted in the ladder meta being catapulted back in time, to a state where Pirates run rampant and Sea Monsters wreak havoc.

Finally, we arrive at this final snapshot of the meta:

Miss Fortune Twisted Fate (Pirates) is reaching Mono Kai’Sa level busted-ness before the balance patch, while Darkness has the exact opposite momentum, despite their (depending on the tech chards) positive matchup versus Pirates.

Viego Evelynn has suddenly shot up in the data, and Monte and I agree that it’s a powerful archetype! Akshan Sivir is rising to a similar PR, with a less drastic slope.

Katarina Gwen is another novel archetype that has shot up out of thin air.

Ezreal Kennen is solidifying their popularity, while a new, more early-game-focused variant of Taric Poppy is popping (pun intended =) up!

Sivir Kai’Sa is back at the top as the peak Kai’Sa archetype. has climbed to #3, chasing Pirates’ success.

Katarina Gwen is also delivering in the WR department with a unique infinite-combo playstyle that is both fun to achieve and mighty.

Akshan Kai’Sa has dropped whopping 4.4 percentage points in WR and is still the fifth-most winning deck in the game. This can only happen at the beginning of a patch! =)

Nasus Kindred is a potent Kai’Sa counter, and it’s showing in its ladder success.

Scouts has taken a hit to its WR since it has a rough time against Kai’Sa, as well as the new SI midrange archetypes of Viego Evelynn and Nasus Kindred.

FTR is overall struggling against midrange decks but still stays in the top due to them countering the two most popular decks in the game – Darkness and Pirates.

Viego Evelynn is not only potent in Monte's and my eyes but also proving themself on ladder. Mono Kai’Sa on the other hand is on the train straight out of the meta! =)

Thank you for reading my meta reports this season. Writing these reports gives me a purpose, and you guys have been exceptionally receptive to my meta-analyses. From the bottom of my heart, thank you for being here and sharing your passion with me.

If you’re still here and read this, tell me your favorite LoR moment this season in the Reddit thread comments, and I will answer you with one of mine! =)

As always, the data has been due to the fantastic website by Balco while the matchup tables have been from Legna’s brilliant homepage. They have been doing an incredible job over the past seasons - years even - at collecting all this data and presenting it to us in an approachable manner. They deserve all the praise in the world!

Thanks also to Herko Khergans, he has been doing the editing behind these reports and become a close friend over my time at Mastering Runeterra! 💜

Thanks for reading and see ya next week season! =)