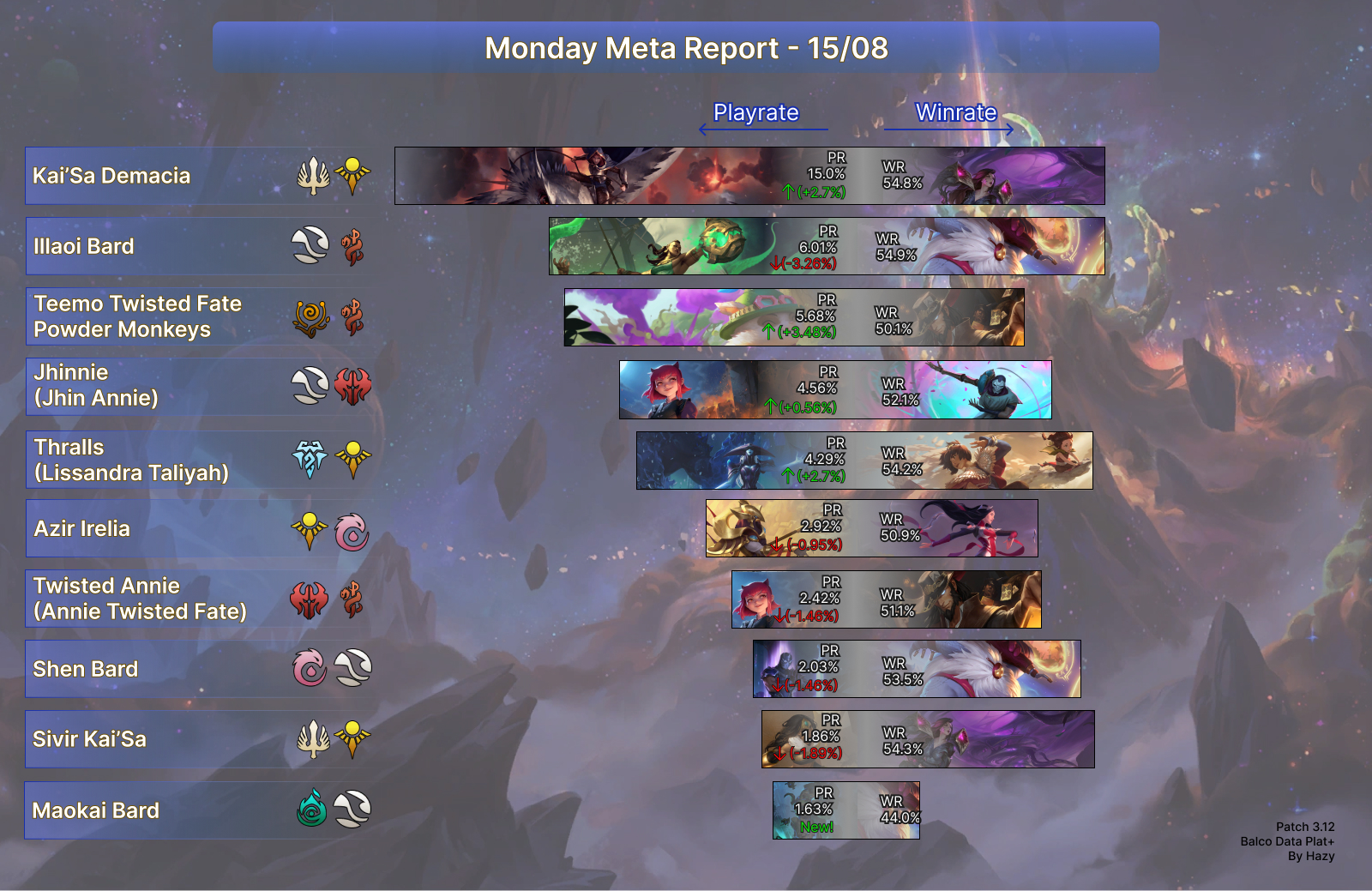 ‘sup everyone. This week, Powder Monkey s bring Powdery (?) Pandemonium to the ladder while the rest of the meta continues its impetus from last week.

Mono Kai'Sa extends its lead in popularity from last Monday and now has more than double the PR of the second most played deck – Illaoi Bard (Chimey Tentacles).

Jhin Annie (Jhinnie) continues to be the most popular aggro archetype around (note that last time, we discussed that Teemo TF is not a classical aggro deck! =), while Lissandra Thaliyah (Thralls) tries with a cold breeze to freeze the heat that Jhinnie brings.

Unfortunately, Azir Irelia is the loser of this whole meta shift and continues its downward trend from last week. The same can be said for Annie Twisted Fate (Twisted Annie).

After its sudden rise in popularity, the decline of Bard Shen (Shard) comes just as surprising. The deck has been an MVP versus Chimey Tentacles but appears to be falling out of favor among the player base.

Meanwhile, Kai'Sa Sivir continues to get overshadowed by its big sis Mono Kai'Sa.

Finally, there are two types of abominations – Void Abomination and Maokai Bard. The latter one was brewed by TealRed and played to APAC rank 1.

Remember that Mono Kai'Sa extended its lead ahead of Chimey Tentacles? Well, that only holds for the PRs. In the WR department, Illaoi Bard gained newfound strength thanks to Shen Bard seeing less play.

Sivir Kai'Sa is now finally behind Mono Kai'Sa in WR, but just barely.

Meanwhile, Thralls is echoing through the frozen landscape that it's not dead and closing the gap with the big three.

Bard Shen’s loss in popularity seems to be beneficial to its WR, as it now sports 53.5%!

Ahri Bard (Charms ‘n Chimes) has been lurking in the shadows as a Chimey Tentacles counter for quite a while. Now, it has crossed the 1% PR mark to be featured in this report and makes an enchanting entrance!

Continuing, Maokia Nautilus (Deep) is back from its abysmal abyss with a solid 52.3% WR, earning it seventh place this Monday!

Jhinnie is still kickin’, and Aphelios Viktor is seeing enough play again to be featured in this report!

Three weeks ago, we emphasized that Sivir Kai'Sa is the best Kai'Sa variant.

“But Leer-sensei, why does Mono Kai'Sa have the higher overall WR now?”

That, my student, is a very good question that I will now explain!

Two weeks ago, we made first contact with the SCP archetype called Shen Bard. Shen Bard has the pesky habit of utilizing Barriers, which are a natural counter to Quick Attack units like Sivir is not affected by this, due to her innate ability to hit the board and level up on round five, and thus her Icathian Rain popping any Barrier on attack.

Thus, Mono Kai'Sa gained a newfound strength that previously wasn’t there. Is this reason enough to make Mono Kai'Sa the better deck? Well, no, as long as Bard Shen doesn’t reach a 10+% PR.

What Barrier Shen did, though, was to further increase the PR of Mono Kai'Sa, since that deck got an inclination to be played more than before.

And this is what broke the camel’s back. In the mirror match, Mono Kai'Sa is favored against Kai'Sa Sivir since the matchup is about who can slam a leveled Kai'Sa down first, and Mono Kai'Sa is better at finding her through Rite of Calling This means that the more Mono Kai'Sa got played, the less attractive it became to play Kai'Sa Sivir since you would lose the head-to-head match. This snowball effect continued until now, after Mono Kai'Sa’s PR increased to 15% for it to be the superior deck in the ladder environment!

. You know, I bought the Starguardian Kai'Sa

skin on her release date and played her for one day. After that, I realized how unfun it is to play against her and never touched her again. Only regrets and shame remain. sigh

Now that we blamed Shen Bard for the rise of Mono Kai'Sa, why the heck is that deck declining in PR but ascending in WR? The following pattern is common: A deck rises in PR, gets targeted/teched for by other ladder participants, and decreases in WR.

But wasn’t Shen Bard’s whole point to counter Illaoi Bard? If Chimey Tentacles decreases in PR, shouldn’t Shen Bard get hit by a truck lose some of its WR?

After all, our LoR Meta Emotion Chart™ is true:

The reason for Shard’s newfound strength can be found in its matchup table. As it turns out, Shen Bard has become more than a one-trick Bard Illaoi counter.

As we can see, Shard benefits from the sudden hype around Powder Pandemonium (Or, in Legna’s matchup table, Plunder Pandemonium. But really, you knew that. Because what other deck uses Pandemonium, and who can even pronounce that word?!)

While I usually try to avoid talking about archetypes that have been prevalent in the last meta, I think Thralls deserves another discussion:

As we can see, Thralls struggles against both our top dogs Mono Kai'Sa and Bard Illaoi. We can also see why Thralls has seen an increase in WR this week – it freezes Powder Pandemonium into smithereens, an archetype that massively gained popularity.

That being said, the next two matchups look rather grim again – it struggles against the aggression of Jhinnie and combo-oriented Azir Irelia.

Looking at Thralls matchup table, one could ask “Why is Thralls the fourth most-winning deck then?” And the answer is not as clear.

Above, you can see what Legna calls “Meta Winrate”. It is the weighted-average (meaning: it takes the PR of the decks into account) WR of Thralls against all decks above a 1% PR.

What does this mean?

This indicates that Thralls is exceptional at beating decks below a 1% PR, which make up almost half of the ladder meta. I discussed this with Legna and he said that you should also consider how hard decks are beating these below 1% PR decks.

I know that this concept can be difficult to grasp, and there is no easy explanation as to why Thralls is better than other decks at doing so. There are no easy examples I can pick, because there is no solid data for these small PR decks.

But if we look at the data that we do have for the big fishes and use some logic, that’s the solution at hand!

Or I am missing something completely obvious and will get called out in front of thousands of people. But hey, that comes with the job of a meta reporter! =) Gwen Aphelios is a niche deck created/popularized by 4LW that aims to beat both Kai'Sa and Illaoi Bard, the two most popular decks on ladder, and that make up more than 20% of the LoR ladder meta right now.

I tested the deck this week and did a write-up, check it out if you wanna know how it went – but long story short, I wouldn’t include Gwen Aphelios here if it wasn’t performing well. As long as you practice patience and can withstand the pain of open passing, I encourage you to try this brew! =) Lulu Shen has been putting up promising numbers for more than a week now. In fact, it’s putting up too good numbers for me to ignore it this Monday, even though I already featured it in my last report! makes a lot of sense, and is something that Bard doesn’t allow Shen to do. s seem to be en vogue, how about an alternative to Teemo TF? Sejuani TF has the benefit of running Tusk Speaker to activate Plunder, and running a real champ in Sejuani Sejuani Twisted Fate is putting up a 52.8% WR over 180 games over the past two days.

Decklists are currently all over the place for Sejuani TF, some run Shared Spoils , while others run Flash Freeze . Feel free to experiment with your own tech cards! =)

This week has been tamer than past ones when it comes to new decks. Nonetheless, we see a lot of big shifts in PR and WR which continue to influence the meta.

Riot has released its planned card changes for this week. What do you hope these changes to look like, and what cards do you wish would’ve seen change instead? Returning to his classic Mastering LoR series, Jasensational introduces another of the fundamental concepts of LoR, and CCGs in general: Value Trades.