In this data-deep article bA1ance shows how many games on average it takes to reach a new deck’s expected mean winrate, and how you may be denying yourself an advantage by not trying to learn new decks! Have you ever felt intimidated to try out and learn a new deck? Has the itch to gain LP on the ranked ladder stopped you from taking the new deck everyone is talking about for a spin?

Or have you dropped a new deck after five or six games, grunting to yourself in frustration - “this crap doesn’t work!”?

Would it help you to know, at least roughly, how many games it will take before you reach the “average winrate” for a new deck that we see in the weekly metagame reports?

In this article, we'll see:

We’re going to rewind to the start of A Curious Journey’s release, but first, a look ahead.

A major balance patch is approaching Runeterra, and we are expecting changes to thirty-three cards. We anticipate it will include nerfs to problematic cards in the format and buffs to under-used cards that have the potential to shake up the metagame.

Looking at More_Synergy’s Reddit post, I don’t know about you, but I’m not sure what a “neat little balance experiment” is. Whatever it may be, I’m excited about it!

Before I go on any further discussing Mastery curves, I have to say: anything and everything I know about Mastery Curves comes from my friend, Legna, who was kind enough to collaborate with me on this effort. I’ve read his exploratory Analysis on Mastery Curves article at least five times and I also asked him many questions about his most recent analysis. To be clear, his analysis was done for this article so I get the honor of talking about it!

What is a Mastery Curve?

Definition: It is the approximate relationship between the number of games played and the player’s winrate with a specific metagame deck.

Before continuing down the path we set out on, we need to ask ourselves: “Why is the number of games a deck is used by a player important?” Let’s go over a graph to give us an idea and get us warmed up for the main dish!

For this analysis, strangely enough, it’s best to have a spread of a varied amount of players with a different amount of games played using the deck in question.

To give you an idea, this is what that spread looks like in graphical form for Galio Gnar DE/FR, but please don’t focus on this graph.

Here is the Mastery Curve for Trundle , which is also part of the analysis, that Legna provided to me. I’m sharing it now so that it’s not too abstract, and it’s easier to visualize, break it down, and discuss.

“Oh man, bA1ance, what are we looking at here?”

Alright, let’s break it down, bit by bit, including how it was put together so that we can understand it. With a solid grasp of this one, we can take a look at the Mastery Curves for the other new decks that emerged into the metagame with A Curious Journey.

The focus here will be on the blue line, but I need to give you as much context as I can to make the concept clear. After going over the basics of Mastery Curves, I will also share information on what the related challenges to analyzing, creating, and placing them into the proper context are so that we make sure to look at the big picture.

Deck Name — this is the deck in question: here we have Trundle

, or as Legna has affectionately named it, Cavemen Time!

Red Line — this is the mean, or average, winrate across the analyzed players.

Notes — in case you’re wondering which players were analyzed, we have answers!

Total Games (X-Axis) — the maximum amount of games with the new deck by each player being analyzed. If you have any questions on this, please refer back to the Game Density curve, above.

Win Rate (Y-Axis) — by definition, and I’m only looking at the axis itself, winrate is the percentage of games won divided by the number of total games played.

Black Dots (ignore the Black Line) — these are the actual winrate for the sample population at each point along the Total Games axis. The black line only connects the points and there are no conclusions we can draw from it.

Blue Line / Mastery Curve — the estimated relationship between the number of games and winrate, also known as the Mastery Curve

With the components of the Mastery Curve explained, let’s look at the results and revisit the caveats and challenges to conducting this type of analysis, to make sure we don’t interpret things that aren’t supported by the data.

Here are the remaining Mastery Curves for new decks that were valid to analyze (I’ll discuss more on the methodology to identify these decks below): Legna was also kind enough to interpret the data and summarize the results and conclusions we can draw.

You may have noticed I haven’t discussed much about the initial steps of the analysis yet and that’s on purpose. My idea was to get to the punch line and then discuss some of the finer points. I would be remiss to not discuss the caveats and challenges to conducting an analysis of Mastery Curves, so let’s go into it.

There are conditions and limitations that are important everyone is aware of, so I’ll list them here:

These are the potential issues and challenges that are faced when performing a Mastery Curve analysis:

Although there may be more questions on our mind now than before, and please do ask them in the comments or reach out to me on Twitter (@bA1anceLoR), or on Discord (bA1ance#0143), we can rest with confidence knowing that it pays off to try and learn new decks!

That’s right, don’t give up too early, five to ten games with a new deck is too few. You should be able to play a deck as well as anybody else after about 20 games. In case you need encouragement, I found this tweet last night and my mind was blown!

Long story short — don’t give up on a new deck too soon! 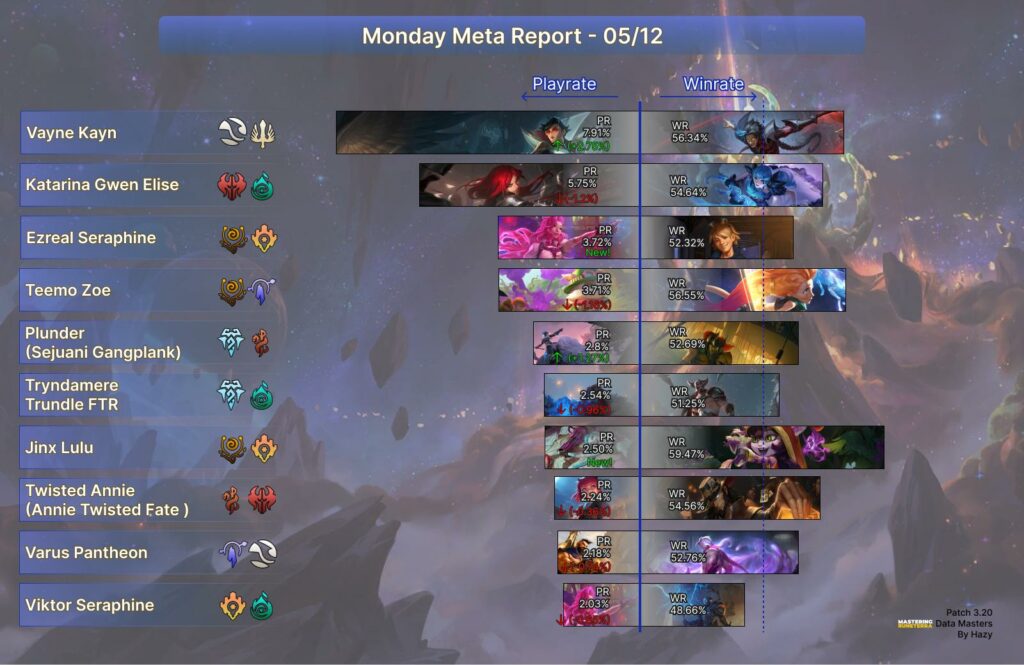