Kevor just has to get some things off his chest. This might not be a strategy article, but who doesn’t like hot takes and drama? Okay folks. This is purely just a rant. I have no idea who would actually enjoy this type of article and at first I was just writing a Tweet. But it got long.

So I figured I might as well post it here for visibility. This won’t be talking about decks or card choices or strategy or anything of the like, but it’s still Legends of Runeterra focus and that’s all that matters… right?

Since I've been active in the LoR community again there has been a lot of talk about the 7-2 tiebreaker system and how it's bad and should not exist but I really feel like this is a "vocal minority" problem and nothing else.

So here are a couple rebuttals. 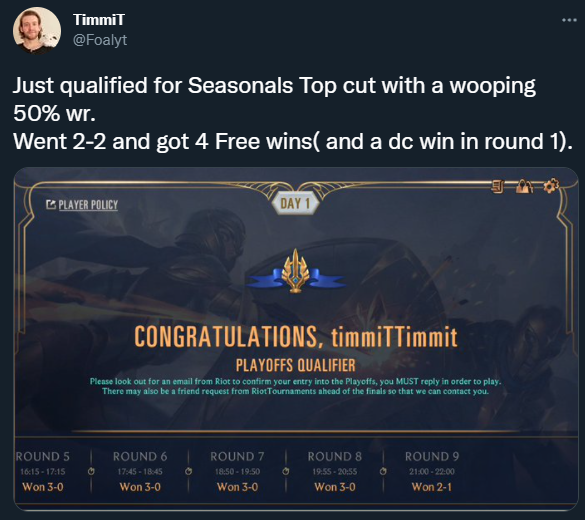 Let me start this by differencing between the tie-breaker system and whatever bullshit this is. You can get lots of byes and make the top 32 with like 2 or 3 wins. That is absolutely a problem and should not happen. It doesn't happen often, but it has happened pretty much one time every seasonal and it is stupid.

The problem isn't the tie-breaker system here, it's just that you don't actually have a "DROP" option from the tournament until you no-show to your round, giving your opponent a 3-0 win. And it's pretty much just luck.

A lot of people actually just keep playing at 2 or more losses for either the cardback, the experience, or whatever their motivation is and that's great.

But for the people that are done and want to stop, there should be an easy way out and it would fix 95% of this problem.

Also I never want to hear that it's not "deserved", you never choose to get the byes, it's purely random. Nobody is going in with the strategy of losing the first 2 rounds to collect the byes and if they do, I guarantee you they are losing way more percentage points than they are gaining by just trying to win every round.

"Ladder is bad and I hate it and it makes me crazy and I don't want to grind it."

This is my biggest pet peeve.

You should not see the 7-2 breakers as a thing you *need* to get. It's there if you want to commit to it, sure, but for god's sake, if you don't enjoy the grind, don't do it. Aim for Top 700 or a Gauntlet Qualification. There are plenty of grass-roots tournaments for you to play throughout the season.

You might say I am biased because the system benefits me but that’s just not true. I went for the tiebreaker exactly two times, got it both times, and never actually used it. One time crashing out and the other time just going X-0.

All the other Seasonals I’ve played or topped I just made top 700 in the season. Because either I didn’t feel like I had the time to commit to it or didn’t enjoy the format (who here remembers the vastness of the Shurima’s desert?)

I feel like the core of this problem is that a lot of people see the 7-2 breaker as the default when it's absolutely not. The default is and always was *8-1 makes the top cut*. This is a double elimination tournament disguised as swiss. Before they made the Seasonal longer, it was straight up single elimination garbage and nobody can sit here with a straight face and tell me this was a better way for top players to express their skills.

From the same train of thought, some people would say that all X-2 should just make it in. This implies you just want less people to be playing and to that I say: why?

I think we should try and find a way for even more people to be playing!

I want LoR and the Seasonal to be as inclusive and as open as possible so even somebody that started playing the game this month, has a shot.

The other way would be to make it more rounds so basically a 2-days event.

Sure that could work but again I feel it's more likely to be a barrier of entry for people than a net positive for the community. Not everybody has the luxury of playing two days in a row. I myself probably wouldn't be playing Seasonals if it was 2 days.

This is not a tournament for competitive grinders, this is a community tournament and should be viewed as such.

"It rewards people in the ladder format, while the tournament format is totally different."

And I want to be clear here: I am not defending the ladder as a whole. I would be the first one to rejoice if they introduced some kind of Bo3 ladder or just reworked the ladder altogether.

But we have to realize that Ladder is here to stay. It's a mainstay of card games and for some reason or another, the majority of the player base likes ladder.

It’s not something I aim to grind every season. But when I enjoy the game and I have time to commit to my favorite hobby, it’s nice that it’s there.

Games like this are better for everyone when they are casual-focused with some small incentives for the competitive players to aim for.

That being said I would *totally* enjoy if some amount of the tiebreakers were also given in weekly tournaments run either by Riot or other organizers that have been maintaining the grass-root competitive scene since the Beta.

“It incentivizes camping, and camping is bad.”

Sure. I also think camping is bad, but I don’t think it’s inherently a problem of the tie-breaker system.

Before the system there were also players, even amongst the top, that didn’t enjoy ladder and played until they hit 200LP and just camped top 700. There will always be some form of camping.

Maybe have some kind of decay until the last two weeks? Or force everyone that wants to hit the tie-breaker to have played at least 10 games a week?

I don’t have a perfect answer here but I believe decaying MMR comes with its own set of problems. No system is gonna be perfect.

Now as a quick side-note, I believe the strategy of trying to hit as high a LP total as possible in the first 2 weeks and then camping is just a bad strategy.

Even this season we’ve seen it backfire quite a lot when people camped at 550LP and realized in the last week that it was not gonna be enough. Causing lots of stress and complaining.

And if you don’t play a lot of tournaments or scrims, and ladder is your main way of practicing, you are actually hindering your chances of doing well by camping. Ladder is a great way to just learn about weird interactions and create some form of pattern recognition in your brain that you can totally use later.

Outside of the very last week, where I’m focusing mainly on scrims anyway, I’ve never really camped. This is also why I finished rank 1 the two seasons I decided to go for the tie-breaker. I could have stopped at 700LP and just camped but I actually believe playing more makes me better. It might not work for everyone, but it works for me.

You can stop reading here if you want and also feel free to tag me on Twitter @KevinAnctil to tell me how wrong I was (in a constructive manner of course). But I have one more thing to I want to add.

“Why should we listen to your opinion on this anyway?”

I’ve played a lot of different competitive systems for other card games, mainly Hearthstone and MTG. Some ladder-focused, some not. I just want to give you some examples of what we could have had instead.

One time the Hearthstone system that rewarded top ladder players was “Top 16 players at the end of the month qualify for the tournament”. This also came with HUGE decay making the first 27 days basically irrelevant. Many players, including myself, just played for 30-40 hours in the last 3 days of a month with energy drinks and coffee as primary nourishment.

This was not healthy.

This was a bad system.

Another system they tried is giving you some points at the end of every month tied to your ladder finish. The higher you get, the more points. And the top points finishers get to qualify for the tournament. This led to major accusations of win-trading between players as once they were “locked in” to play in the tournament they basically had no more reason to play.

This might have been better, but it was a bad system.

This was a bad system.

Now if you’ve actually played those systems you will know I generalized for the sake of simplicity, but it’s mainly to give you an idea.

My point is: I’m a grinder. I’ve tried it all and I’ve succeeded in those grinds most of the time.

I’m telling you, this current LoR system we have is the best one I’ve tried yet.

- Get your profile to add and share decks
- Connect your Riot account to get match history and deck stats
SIGN UP NOW
PrevPreviousNEW EXPANSION – A CURIOUS JOURNEY!
NextExpeditions: Advanced ResourcesNext